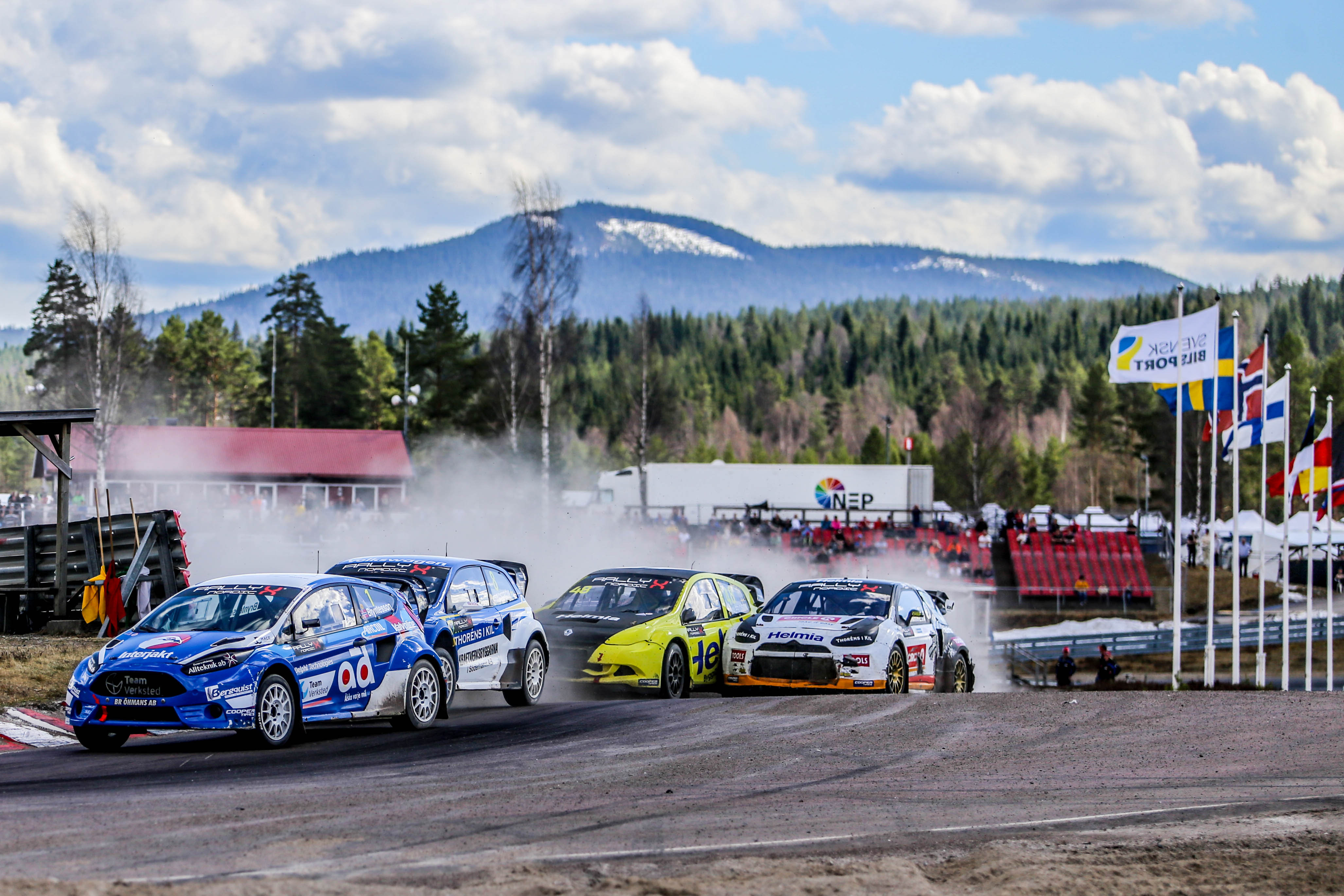 Thomas Bryntesson has begun the defence of his RallyX Nordic crown in fine form with a battling victory in the opening round of the 2018 season at Holjes. Lukas Walfridson and Mats Ohman completed the podium as the revamped RallyX Nordic kicked off with a successful season opener.

Demonstrating an impressive strength in depth with 17 and 21 entries for the headline Supercar and Supercar Lites classes respectively, a passionate crowd were treated to a packed schedule of close racing in excellent weather conditions, including for the first time a triple semi-final format.

While RallyX Nordic begins 2018 with a fresh outlook, it was a familiar figure that nonetheless ended the weekend on top of the podium as defending champion Bryntesson prevailed in a dramatic Supercar final.

The Norwegian recovered from a crash in Q2 to dominate his semi-final and ensure a front row spot for the final alongside pole man Peter Hedstrom. Getting away well in his Ford Fiesta to grab the lead from Hedstrom into turn one, Bryntesson controlled the race thereafter to claim a clear victory for JC Raceteknik.

“We had really good speed all day,” Bryntesson commented. “I hit the bank at the start of Q2 but we fought back and in the final we went flat out, so it all came together. I think it will be a tough fight this year. There are many good drivers and teams, so I expect it to be even closer in the next few races.”

With Bryntesson finishing three seconds clear of the competition, Helmia Motorsport’s Walfridson followed in second place after soaking up pressure from Oliver Solberg in an exciting podium scrap. Walfridson’s team initially faced a race against time to get his Renault Clio repaired after it developed a technical issue in the semi-finals, but the Swede recovered admirably to get his season off to positive start.

OSRX’s Solberg looked to be on course for the rostrum too, only for the 17-year old to spin his Citroen DS3 out of contention on the final lap in his efforts to unseat Walfridson.

As a result, Ohman emerged as big beneficiary to claim a popular podium result. Ohman, who is paralysed from the waist down, ran sixth initially following a poor start but made up ground as rivals slipped out of contention ahead.

Indeed, only three drivers would see the chequered flag in the final after Hedstrom retired with technical issues whilst battling for the lead, Eklund Motorsport’s Philip Gehrman parked up his VW Beetle before the finish and Solberg crashed out.

Despite his disappointment in the final, Hedstrom nevertheless ends the weekend third in the standings – behind Bryntesson and Walfridson – after topping the Intermediate Classification in his VW Polo. Similarly, OIsbergs MSE’s Oliver Eriksson secured a strong haul of points in the qualifying heats despite a puncture halting his progress at the semi-final stage.

In the Supercar Lites category, Olsberg MSE’s Guillaume De Ridder overcame a strong field to claim a convincing victory. The Belgian racer, competing in RallyX Nordic as preparation for a full-time campaign in the RX2 International Series, led from the start to finish clear of Linus Ostlund and Glenn Haug.

With Holjes heralding the start of an exciting new era for RallyX Nordic as it explores new initiatives to ensure value for teams, a high level for drivers and, importantly, entertainment for audiences, Series Manager Ian Davies says the weekend lays the foundation for an exciting future.

“It’s been a successful start to the 2018 RallyX Nordic, one that sets the stage for what will be a fantastic season both on and off the track. An enthusiastic crowd has been treated to some classic rallycross racing around one of the sport’s best-loved circuits and it is welcoming to see so many embrace our long-term outlook for this much-loved series. Congratulations to each of our podium winners today, especially Supercar winner Thomas Bryntesson, who battled hard all day to come out top against tough competition. I’m sure we’ll be seeing more of the same great action for round two in Arvika on 2-3 June.”

Round 2 of the RallyX Nordic will take place at Arvika in Sweden on 2-3 June.