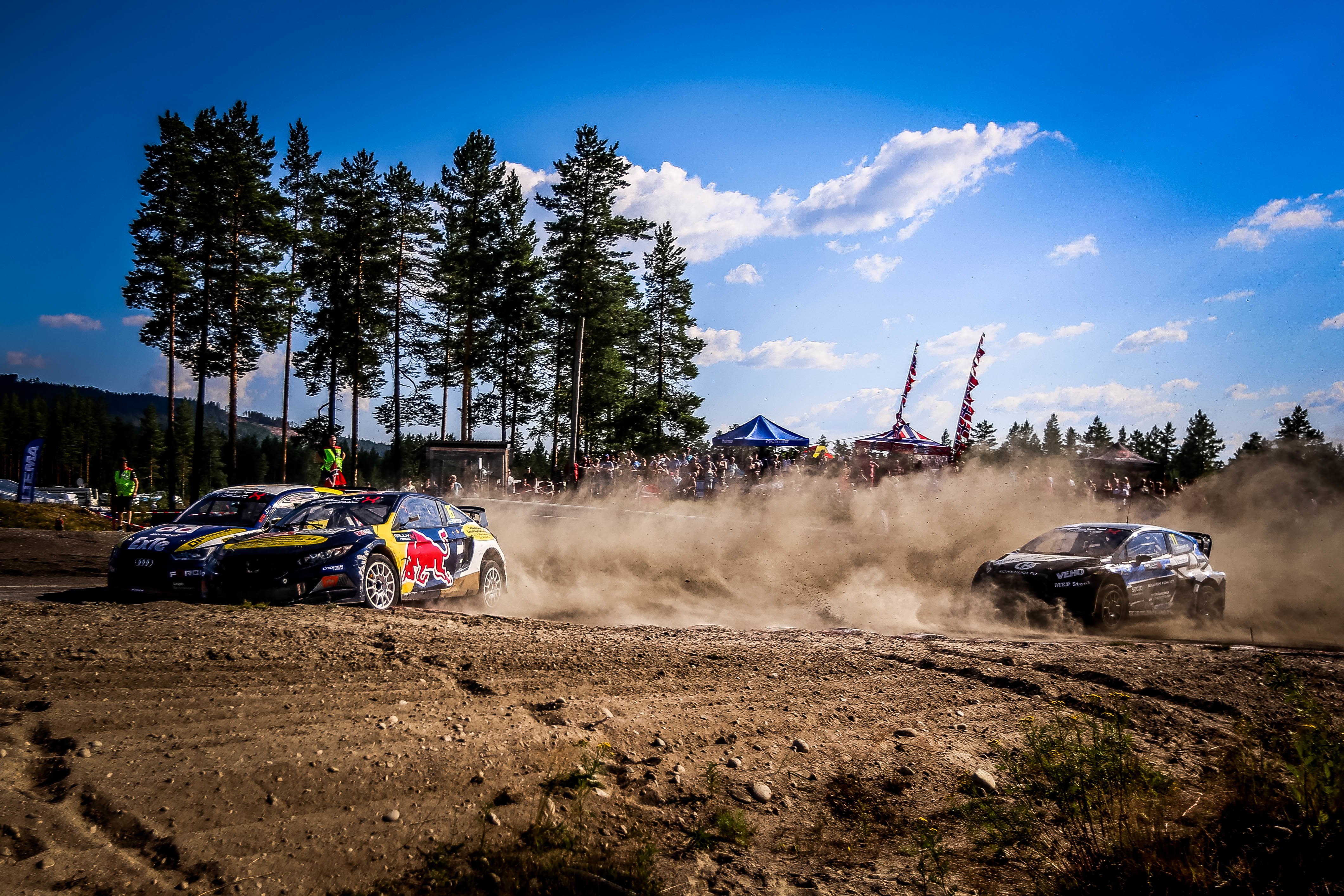 A sensational scrap for Supercar glory is in prospect at Tierp Arena this weekend (21/22 September), as Oliver Eriksson, Robin Larsson and Jere Kalliokoski prepare to lock horns for the coveted RallyX Nordic presented by Cooper Tires crown – with the destiny of the title similarly still to be decided in the Supercar Lites, RX Academy and CrossCar classes.

The racing has been spectacular across the board in RallyX Nordic this year, with little to choose between the leading protagonists in all four categories – and now, the gloves are coming off…

Supercars: Too close to call

Eriksson, Larsson or Kalliokoski – take your pick. The trio are blanketed by just 12 points at the summit of the Supercar standings arriving in Sweden, and with 30 points still available, even the slightest stroke of misfortune could turn the championship on its head.

Eriksson leads the way as he has done since the second round of the season, but last time out, the Olsbergs MSE driver endured a difficult weekend, losing a wheel and picking up a penalty in the qualifying races before leaving himself with a mountain to climb following a poor getaway in the final. The Swede is looking to avenge both his Kouvola frustration and his disappointment at Tierp last year, when he missed out on the title to namesake and countryman Oliver Solberg.

“We’re in the best position we can be going to Tierp,” Eriksson asserted. “We didn’t get the result we wanted in Finland, but the pace was still there as it has been all season, so I’m feeling confident ahead of the last round.

“We’re not going to change our approach for this weekend. We’ll still be going for maximum points and the win. Last season didn’t go to plan, so this year I’m going all-out for victory!”

Larsson’s dominant display at Kouvola catapulted him to within four points of Eriksson in the battle for honours, and the Swede received a timely boost earlier this month when he was crowned 2019 FIA European Rallycross Champion in France. Larsson will be joined in the JC Raceteknik camp at Tierp by former FIA World Rallycross Champion Mattias Ekström, who is sure to thrill fans on his Nordic debut at what he calls his ‘home’ circuit.

The series’ own ‘Flying Finn’, Kalliokoski, has been ultra-consistent all season – finishing off the podium just once – leaving him only 12 points shy of the lead and still in with a chance of taking the title. With nothing to lose and everything to gain, Kalliokoski could be the one to watch at Tierp.

The scrap for ‘best of the rest’ is still very much alive, too, with Ulrik Linnemann, Andreas Carlsson and Philip Gehrman all covered by 20 points in fourth, fifth and sixth places respectively.

Ben-Philip Gundersen currently occupies the top spot in the Supercar Lites table, the Norwegian enjoying a fantastic run mid-season but coming slightly unstuck in recent events due to punctures and penalties. The JC Raceteknik ace is determined to make amends for his championship defeat in 2018 at the hands of current FIA World RX star Guillaume De Ridder.

“Even though we are in a good situation, nothing is settled before the last race is over,” he cautioned. “I have to stay focussed and do everything right to beat Linus [Östlund]; he’s a good driver and in racing, anything can happen. I’m really looking forward to it and hope it will be a good event.”

Consistency allied to a late season charge has been the key to Östlund’s title challenge, with the Olsbergs MSE driver notching up three podiums and a win to keep himself in contention. The Swede will have the home crowd on his side this weekend as he bids to close down the 12-point gap separating him from Gundersen in the standings.

Although he is now mathematically out of the race for the crown, Sondre Evjen is sure to be one of the pace-setters at Tierp, while Swedish trio Simon Olofsson, Jimmie Walfridson and Anders Michalak are locked in a tight tussle for fourth place in the final classification.

Wins in Denmark and Latvia allowed Rasmus Tuominen to take a commanding lead of the RX Academy mid-season, but all the while, Tommi Hallman was quietly collecting points under the radar. Hallman then enjoyed a stellar weekend at his home event last time out to move to within five points of Tuominen, thereby taking the championship battle down to the wire.

Round one winner Marko Muru sits a distant third, still in with a mathematical chance of lifting the laurels, while Luka Nurmi has been regularly on the front-running pace but has yet to reach the top step of the podium in 2019 – a statistic he has one last chance to rectify this weekend.

CrossCar boasts the closest championship battle of the four Nordic categories. After a phenomenal victory in the most recent round in Norway, Jimmie Österberg is top of the pile, just three points ahead of defending champion Nils Andersson, who suffered mechanical issues at Finnskogbanen.

JC Raceteknik Juniorteam driver Isak Reiersen also remains in contention, but the youngster will have his work cut out to make up a 24-point deficit. Supercar Lites round one winner Thomas Holmen, meanwhile, will be joining the CrossCar grid in Tierp as he tests the waters ahead of a possible 2020 campaign.