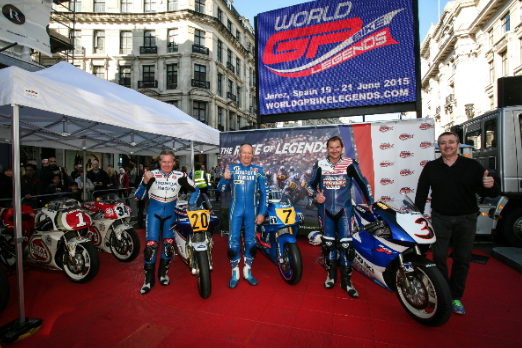 The first ever World GP Bike Legends takes place in just a month’s time at Jerez, Spain on 19-21 June. A full weekend festival spectacular, the event will see an incredible array of former motorcycle world champions and race winners going elbow to elbow on track while live music, modern and classic bike displays, trails shows and trade stands keep the off-track entertainment at fever pitch across all three days.

Alongside the likes of Freddie Spencer, Wayne Gardner, Kevin Schwantz, Christian Sarron, Loris Capirossi and many more, there are some late additions to the racing bill this week, as Niggi Schmassmann joins the legends roster and Michael Neeves signs up as a guest entry.

Schmassmann raced at 500cc World Championship level between 1988 and 1996 for Honda and Yamaha, though his crowning achievements came at national level. The Swiss ace topped the German 500cc championship an impressive four times and raced successfully in the European Endurance Championship.

Michael Neeves is a Senior Road Tester for UK publication Motorcycle News. He has tested every new bike for the past 13 years, as well as racing bikes, including 250cc and 500cc Grand Prix machines, 990 and 800cc MotoGP bikes and superbikes from the world, domestic and endurance championships…and everything in between. Now he’s joining the ultimate Race of Legends for an incredible weekend in June as Guest Rider.

The full list of confirmed riders is as follows:

Furthermore, World GP Bike Legends has signed an agreement with Sunoco to be the Official Fuel Supplier to the race festival.

Supplying top quality fuel, Sunoco are no stranger to the racing world and are delighted to be involved in this inaugural event. They will have a full range of fuels available in the paddock for competitors throughout the weekend.

Manuel Dongil of RR2 Racing Fuel SL, said: “We’re delighted to be supplying the fuel at what promises to be a fantastic event and one that fans of motorcycles should not miss. Seeing the racing legends of the ‘golden years’, the ‘80s and ‘90s, such as Freddie Spender, Wayne Gardner and Carlos Cardus, thrashing around Jerez circuit on the original 2-stroke bikes, I can’t wait. There’s a whole race schedule over the weekend, featuring not only the 500cc and 250cc bikes, but also 350/250cc, 125cc and 80cc, so there’s a real mix and something for everyone.”

If you would like to gain media access to the event, please email your request to tom.wood@mpacreative.com with the following information:

Only photographers need to supply the following additional information:

If your application is successful, you will receive further instructions for the event directly.

Accreditation closes on Wednesday, 10 June – applications sent after this time may not be considered.

We look forward to seeing you there.