TIGHT AT THE TOP 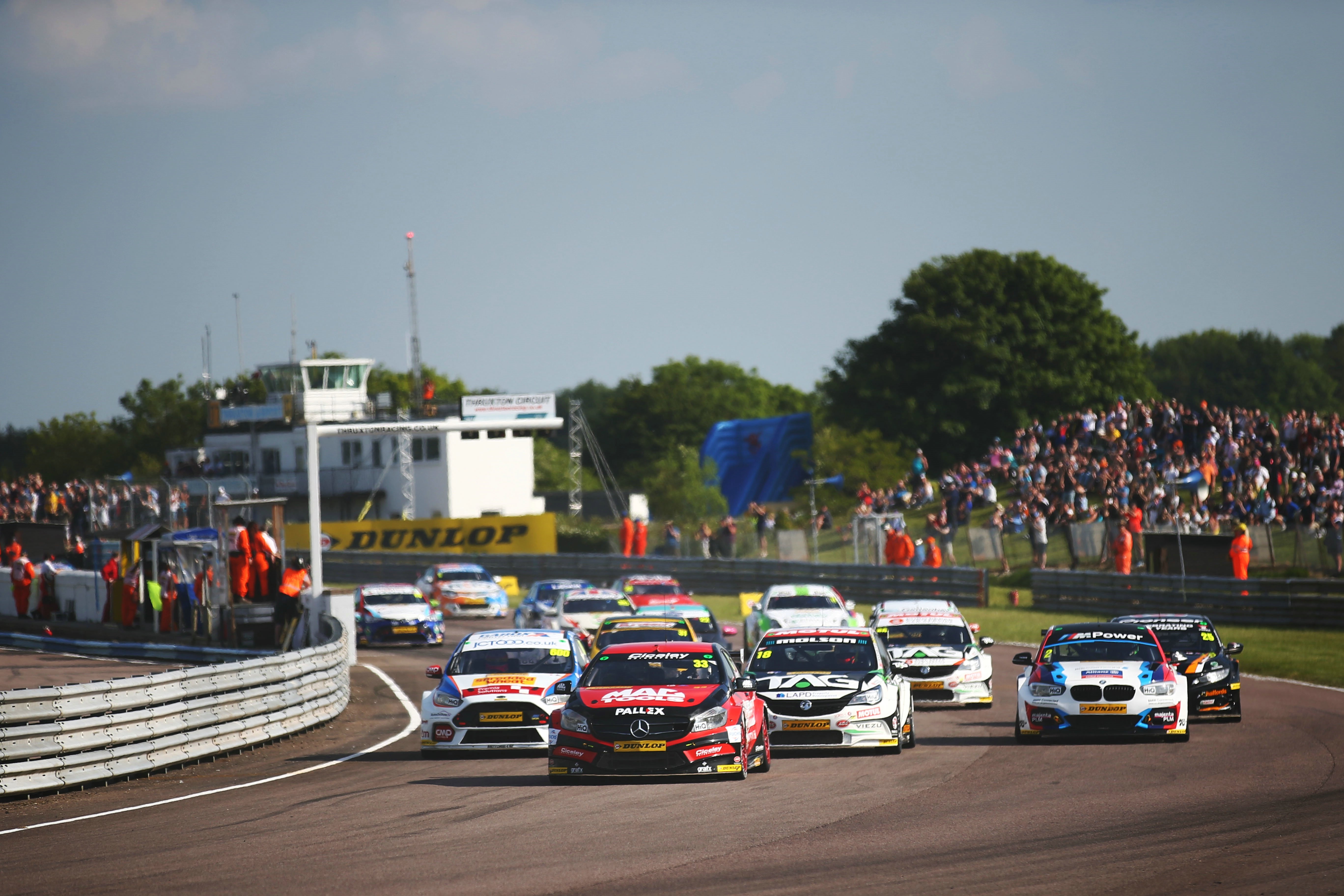 The Dunlop MSA British Touring Car Championship twisted this way and that at Thruxton a fortnight ago and it is shaping up to be anybody’s game once again as the UK’s biggest motorsport series heads north for a blast around Cheshire’s picturesque Oulton Park circuit next weekend (9-10 June) – a fan-favourite venue, with tens of thousands set to soak in the festival-like atmosphere.

The opening three events of the BTCC’s 60th anniversary Diamond Jubilee campaign have thrown up the sort of fiercely competitive, high quality racing that the championship is renowned for and its current crop of young chargers are at the fore, led by Oulton ‘local’, Lancashireman Adam Morgan, with Josh Cook and Tom Ingram in close company. The opening nine rounds have produced six different victors, and a host of fresh faces have joined them on the rostrum.

A record crowd lapped up the sunshine and the first-rate on-track action back at Thruxton in Hampshire, which saw the championship’s experienced heads bite back. Halfords Yuasa Racing’s series legend and triple champion Matt Neal stole the initiative for the Honda outfit on home soil with a storming pole lap – smashing his previous lap record set a year prior. His pace wouldn’t be denied in the opening race of the weekend, either, as he fended off the advances of another multiple BTCC champion in Team BMW’s Colin Turkington on the way to a dominant lights-to-flag win.

Both Neal and Turkington took to the podium again in race two, and come the end of the weekend the latter had gathered the most points of any racer over Rounds 7, 8 and 9, with Neal notching the second-highest total, catapulting both right into the Drivers’ Championship charge in fifth and sixth – hot on the heels of their younger rivals who’d made hay at Brands Hatch and Donington Park.

Oulton Park is beloved by families and campers, with thousands packing the surrounding fields ready to cheer on their favourite drivers, teams and local heroes, and there’s always a unique feel when the BTCC comes to town. Everything’s broadcast live and free-to-air by the BTCC’s longstanding partner ITV, on ITV4 the ITV Hub and online at itv.com/btcc. You’ll be covered down to the finest detail wherever you are – be it kicking back in the campsite or enjoying the action from your living room.

Tight at the top
The gap between Adam Morgan’s Mercedes-Benz out front in the Drivers’ standings and the Power Maxed TAG Racing Vauxhall of Josh Cook in second spot is just a solitary point. In fact, there are only 18 points between the championship’s top five drivers with 22 up for grabs in any single encounter. When one considers that 17 points stood between the top two in the table at this same point last season, it’s clear to see just how keenly fought the battle for the most coveted prize in British motor racing is this time around.

Morgan’s leading tally heading to Oulton is some 35 points shy of Ingram’s benchmark this time last year – it’s been a tooth-and-nail scrap so far for the Ciceley Motorsport man to hit top spot. There’s also half the number of points between the championship leader and tenth spot in the running, currently harboured by Chris Smiley, as there was in 2017. The battle for top honours has scarcely been more fierce.

Local heroes
Oulton Park lies in a catchment area encompassing Cheshire and Lancashire and has proven to be something of a hotbed for BTCC talent with a number of teams and drivers calling the circuit home – starting with table-toppers Adam Morgan and Ciceley Motorsport.

The Lancashire racer hasn’t had much cause to celebrate in his back-yard in recent years – with last year getting particularly toasty for Morgan as his Mercedes caught fire in spectacular fashion. He leads the charge this season heading to the Cheshire circuit and as a result carries the maximum complement of success ballast – meaning a doubly difficult prospect for the weekend to come. Ciceley also head the way in the Independent Teams’ standings.

“For once, I’d love to go to Oulton Park and have a good result,” said Morgan. “Our history there is not so very good but we’re confident we’ll go there this year on the best form we’ve ever been in and get a result. It’s never been that kind to us and with the full 75 kilograms of success ballast on-board as championship leaders, it will be a challenge but we’re hopeful we’ll make the best of it this time around.”

Tom Oliphant’s a Cheshire lad and the local racer is hoping to push on in front of his home support after points scores in just his second weekend in Britain’s top-tier tin-top series back at Donington Park.

“It’s always brilliant to go back to my home circuit, and for me, the Oulton Park weekend is one of the best BTCC events of the year,” said Oliphant.

“The crowds are always huge and really passionate. Driving round, you can barely see the green grass as the banks are packed and that’s a great feeling for a driver.

“I’m confident that I can build on everything I’ve learned so far this season and make Oulton Park a successful weekend for me and the Ciceley Motorsport team.”

Incumbent Independent champions Speedworks Motorsport hails from just down the road in Sandbach and they’re right in touch in the Drivers’ and Independents’ running once again this season, with the outfit’s self-proclaimed goal being to go one better this year and propel driver Tom Ingram to the overall BTCC title.

Timetable and tickets
All three BTCC races on Sunday, 10 June – and many of the day’s other races – will be broadcast live and in high-definition on ITV4 and over at itv.com/btcc. Those in attendance at the circuit can stay in touch with circuit commentary and live timing from every session, available at btcc.net/live throughout the weekend.

The support series on the TOCA package are also guaranteed to thrill with a double digit total of races set to entertain the crowds. Porsche Carrera Cup GB, Renault UK Clio Cup, MSA Formula Championship and the Ginetta championships will all be in attendance in Cheshire, making for a weekend of truly unmissable racing.

Discounted advance tickets are on sale online from just £28 for Sunday, 10 June and they are available on the gate at £16 for Saturday, 9 June, with weekend tickets including a Paddock Pass available for just £37.

They can be purchased online at www.oultonpark.co.uk, by calling 0843 453 9000 or from the ticket office. Accompanied children aged 13 and under are admitted free.