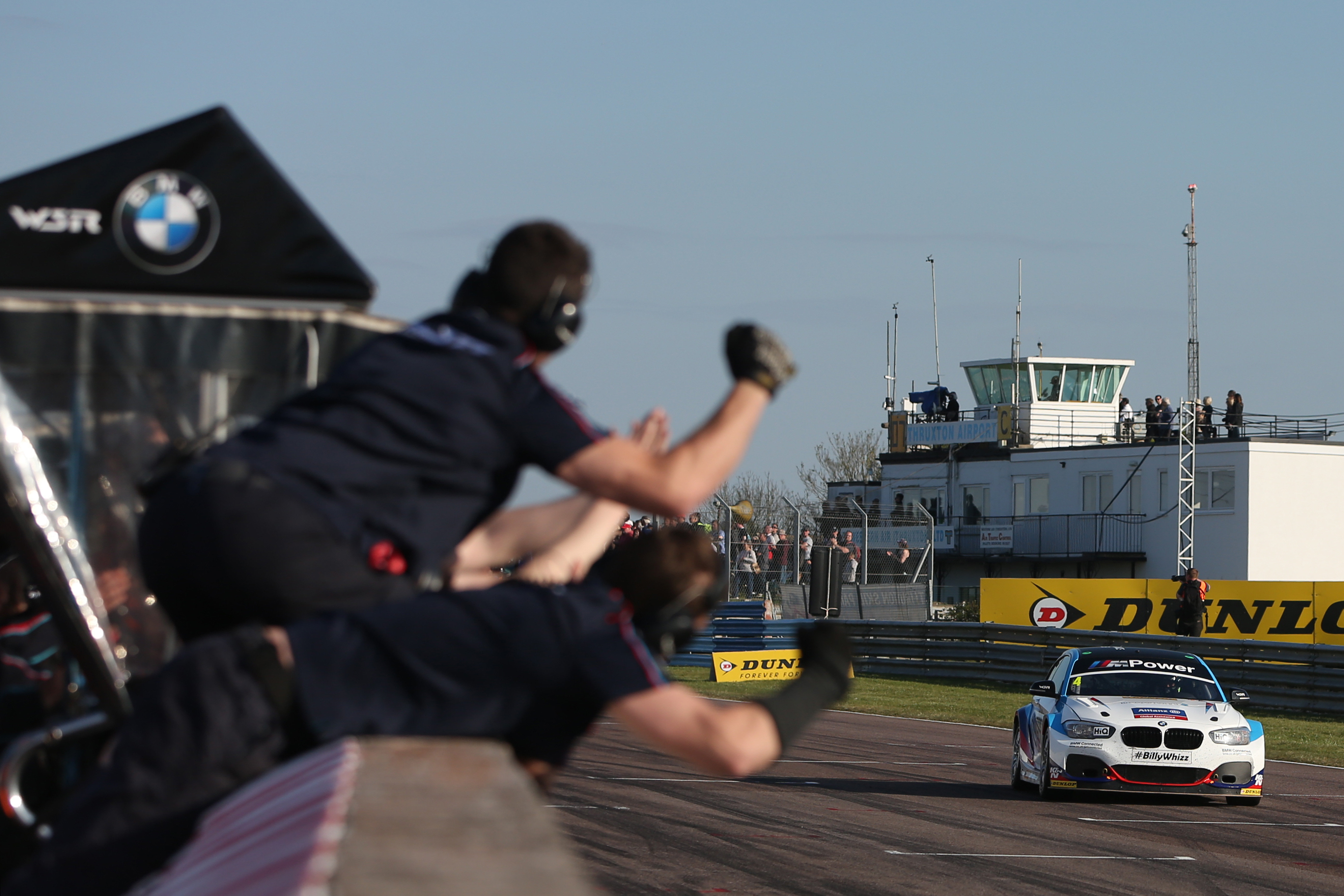 It was a faultless lights-to-flag display from pole-sitter Neal, who drew level with Andy Rouse’s tally of 60 BTCC wins – the equal-second most victories in BTCC history.

Collard then claimed his first-ever triumph at Thruxton in a truncated encounter that included two stoppages and heartache for race one winner Neal.

Team BMW’s Collard had already surged from tenth on the grid up to sixth, before the race was red flagged for the first time following a high speed accident involving Senna Proctor’s Vauxhall and the two MGs of Aron Taylor-Smith and Daniel Lloyd.

Local driver Collard blasted his BMW 125i M Sport off the line again at the restart, firing his rear-wheel drive car up to third and immediately harassing the two factory Hondas ahead of him.

It was three-wide for second into the final chicane on the opening lap as Collard emerged, ‘elbows out’, ahead of Goff and Shedden.

The drama continued as the Honda Civic Type R of initial race leader Neal crawled into the pits with steering problems one tour later, handing Collard the advantage.

With the race seemingly building towards an exciting climax it was unfortunately cut short due to an accident for the Team Shredded Wheat Racing with Duo Ford of Martin Depper.

So, as the red flags waved it was Collard claiming a maiden win on home soil at Thruxton from Shedden and Ingram, who had both dispatched Goff earlier in the contest.

Then came another magic milestone as Turkington – having powered to two BTCC titles in BMW machinery – fittingly secured the memorable century for the German manufacturer.

The West Surrey Racing driver produced a commanding getaway from pole position and never looked in danger – the Northern Irishman eventually taking the chequered flag nearly three seconds ahead of the chasing pack.

Speedworks Motorsport’s Ingram took second place to extend his lead in the Drivers’ Championship, whilst Goff claimed a second podium of the day. The latter’s trio of top four results was just reward for the 26-year-old and his Eurotech Racing squad.

Honda’s Gordon Shedden finished fourth in the final encounter – cementing his place as the highest points-scorer over the course of the weekend, keeping pressure on Ingram in the process. Turkington is now third in the standings after his latest success.

Honda closed the gap on BMW in the Manufacturers’ order while Team BMW slightly extended its advantage in the Teams’ standings.

Matt Neal said: “I hadn’t given much thought to equalling Andy’s win tally, to be honest. We all thought Andy’s record was unachievable and even though Jason [Plato] exceeded it, I never thought I would get there. Just unbelievable. Yes, there are a lot more races in the season now, but its tough out there. We had a bit of a nightmare here last year and then Donington Park was a rotten weekend all-round for everybody, so to come away with a Halfords Yuasa Racing one-two and a Honda podium lockout on home soil is a dream – a fabulous result. I made sure to look after the car and the tyres were superb throughout.”

Rob Collard said: “The BMW felt absolutely stunning and I’m so pleased for the team. We did a lot at the first start, and then the re-start was similarly textbook. I had a really good opening lap and then I’m not sure what happened to Matt – I could see sparks coming off – so it was obviously a shame for him. but I will take this one and with pride. I must admit, going three-abreast into the chicane was pretty scary! I had one of the Hondas on my left and then cheeky Jack Goff snuck up my inside on the right – I didn’t see that one coming! The BMW was on fire today and it’s brilliant to take my first win of 2017. A big shout out to Billy [Monger], who is watching at home on TV – Forza!”

Colin Turkington said: “I wasn’t that confident before the race because we had been chasing the set-up all day, but the guys never let up which moved the car in a new direction – and the pace was there for all to see. To achieve BMW’s 100th win in the BTCC is a very special feeling for me. I grew up watching the likes of Smokin’ Jo Winkelhock and Tim Harvey, so to continue the history of this iconic brand means a lot to me. I’m so pleased to end the day like this. The BMW 125i M Sport is a fantastic car at the moment and we’ve really got it in the window. Thruxton has always been a challenge for us – it’s probably the circuit where we’ve won the least – so to take two victories is fantastic.”

Tom Ingram said: “After last month’s test, we came here knowing we had a car that would struggle to set a quick qualifying time but would be very strong in the races – and we proved that today. It’s a cracking points total to take away from here, and as long as we keep focusing on the consistency, the results will keep coming. That approach is paying dividends at the moment. At some stage, the gap will clearly close up but while we’re extending it, then I’m very happy.”

Jack Goff said: “We actually finished where we started for once – I’ve usually gone backwards this year! It’s a great result for Eurotech Racing and all my sponsors, because I’ve made them wait a little while this year for my first podium and it’s nice to finally be able to repay their support. I was keeping pace with Shedden until one of the Audis – which we were lapping – had a massive moment right in front of me and I had to lift off the throttle, which cost me all my momentum but we’ll still definitely take third place. We started off the weekend pretty strong in practice, and that form continued today. We improved the car again for the last race. I made a mistake through Church that allowed Tom [Ingram] to get a run on me and get past, but it’s been a very solid weekend with two third places and a fourth – I think we can be very happy with that.”

Gordon Shedden said: “To be on the front row with 75kg in the car definitely exceeded my expectations; every lap was an adventure as I tried to keep my foot in for as long as possible through the faster corners out the back of the circuit – there wasn’t much left in the tank! I got a slightly better start than Matt in race one but he was a lot lighter than me so I didn’t force the issue too much. It was fantastic for him to take his 60th BTCC win, and a tremendous effort from the boys to get a one-two finish. It was disappointing that we didn’t have another five or six laps in race two because we were definitely faster than Rob and then race three was another good finish. You always want more of course, but we came away with three very solid results and a strong points haul – and that gives us a lot of confidence going to Oulton Park.”