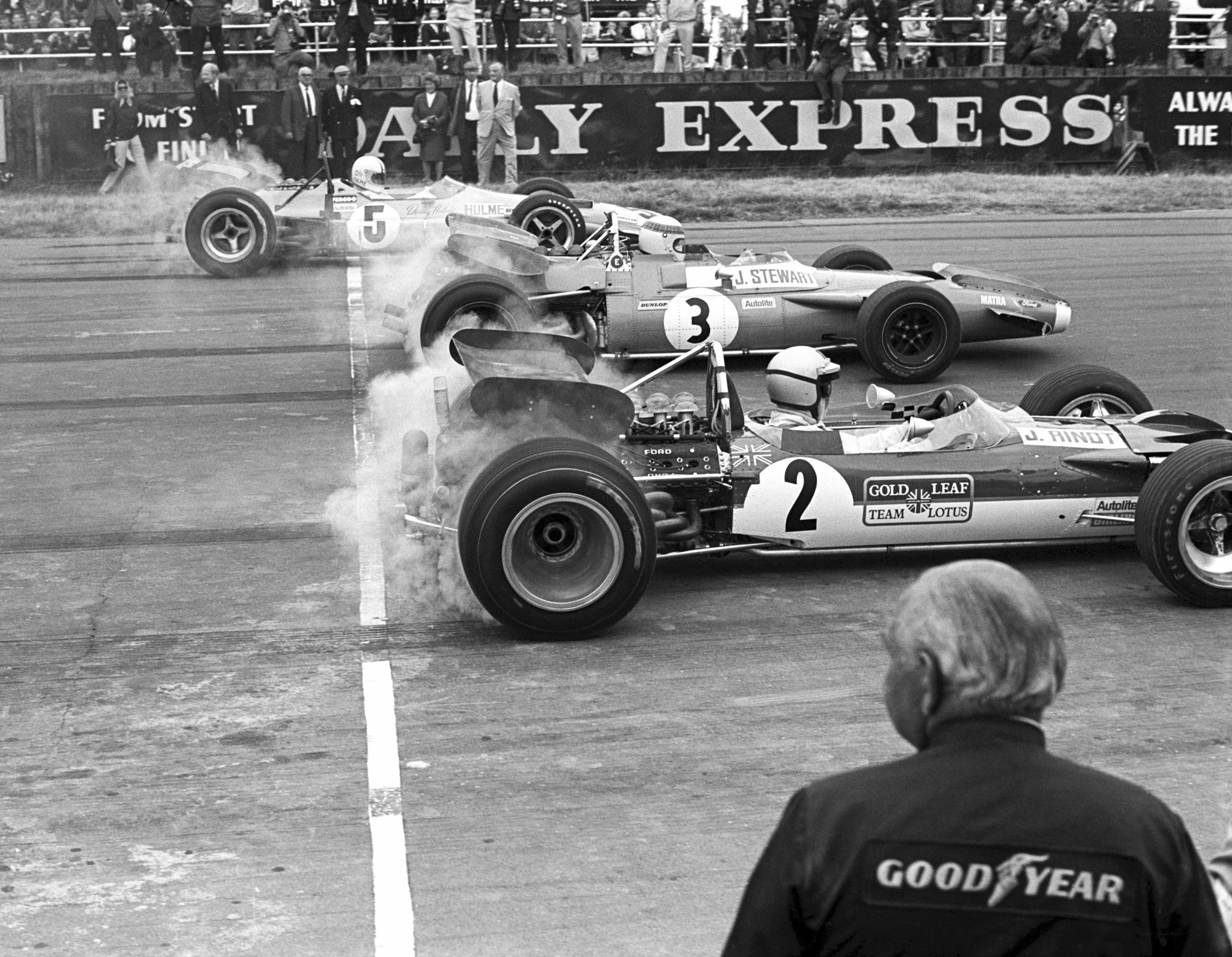 With 1,000 exquisite race entries and more than 10,000 cherished treasures on display at the spectacular Silverstone Classic (26-28 July), the cars are always the stars at the biggest classic motor racing festival on the planet.

For three memorable days, both racing paddocks will be packed with many of the world’s finest and most revered competition cars, not only spanning a full century of epic motor sport history but also showcasing the sport’s complete spectrum from iconic single-seaters and magical GTs through to much-loved touring cars and dramatic sports prototypes.

Adding to the incredible show, much of the 760-acre Silverstone estate laying between the pair of paddocks is brimming with dazzling displays of privately-owned classic cars. A record number of car clubs have registered for 2019, with Saturday’s glittering display areas totally sold-out.

Flaunting a wealth of wonderfully evocative automotive history, the Classic offers both casual visitors and serious enthusiasts an unrivalled spectacle of motoring through the ages – a true assault on the senses!

With so much eye-catching machinery on show both on and off the famous Grand Prix circuit, it is almost impossible to select just ten standout star cars that really shouldn’t be missed. Nevertheless, here are the exceptional heart-stoppers that everyone attending will want to see.

They are not necessarily the fastest nor the most expensive paragons on show but, like so many of the esteemed cars at the Classic, they all have great stories to tell.

1963 Ford Galaxie
With so many stars and cars competing at the Classic, the sight of a former World Rally Champion racing a sixties American muscle machine may not appear worthy of special note – but this is a dream come true for 1984 WRC title-winner Stig Blomqvist. As a teenager in Sweden, Stig’s motor sport passions were fuelled when attending a round of the European Touring Car Championship at his local Karlskoga circuit and seeing a mighty 7-litre Ford Galaxie thundering around the track. Now, 45 years later, he’s going to be racing that very same car at the Classic in the Transatlantic Trophy for Pre ’66 Touring Cars.

1964 Mini Cooper S
To mark the game-changing Mini’s 60thbirthday in appropriate style, special dispensation has been granted to stage two incredible races with record grids packed full of 60 pre-’66 Cooper Ss. Watching them swarming around the Silverstone GP circuit has to be worth the price of a ticket on its own! Adding to the Diamond Jubilee party, rally legend Paddy Hopkirk will lead a huge track parade on Friday driving the same red Mini #37 (reg 333 EJB) in which he famously won the 1964 Monte Carlo Rally – he’ll also bring his trophy with him, making the celebrations all the more special and when not taking part in the Parade, the car will be on display with the British Motor Museum on the Village Green.

1965 Ferrari 1512
With its mesmerisingly small, 1.5-litre, flat-12, high-revving zinger of an engine, the Swiss-watch Ferrari 1512 is one of the most gorgeous and sweetest-sounding of all F1 cars. Ferrari built just three and they were raced by the likes of John Surtees, Lorenzo Bandini and Pedro Rodriguez in the mid-sixties. One of these remarkable jewels is today owned by Larry Auriana, and he is bringing it across the Atlantic to race at the Classic for the very first time to race for the Gallet Trophy for Pre ’66 Grand Prix Cars (HGPCA). See, listen and marvel!

1969 Matra MS80-02
Fifty years after winning his first British Grand Prix at Silverstone en route to the first of his three F1 World Championship crowns, racing legend Sir Jackie Stewart will be back behind the wheel of his title-winning Matra MS80-02 for some evocative demonstration laps on both Saturday and Sunday at the Classic. The Flying Scot will also be raising awareness and funds for dementia research, a charity cause very close to his own heart.

1969 Ford Capri
It is 50 years since the Mustang-inspired Ford Capri was first launched at the Brussels Motor Show in 1969, and the fastback was not just – as marketed by Ford – ‘The Car You Always Promised Yourself’ but also a mighty fine racing car. Proving the point, tin-top ace Gordon Spice took the top class honours in the BTCC for five seasons in succession between 1976 and 1980, and one of his multiple race winning red Capris is competing at the Classic. Spice will also be present at the home of British motorsport to award a one-off trophy to the top Capri racer in the Historic Touring Car Challenge race and will also lead out a special Capri anniversary parade behind the wheel of the very same Capri with which he enjoyed such success.

1979 Williams FW07
The once great Williams F1 team may no longer be quite the force it once was but this July marks the 40thanniversary of its maiden victory: Swiss speedster Clay Regazzoni made the breakthrough when winning the 1979 British Grand Prix. Examples of the innovative FW07 – as campaigned so successfully by Regazzoni, Alan Jones and Carlos Reutemann in period – are still racing, and winning, at the Classic today. They star in the weekend’s two blue riband races contesting the Sir Jackie Stewart Trophy for FIA Masters Historic Formula One races, featuring F1 icons from the sport’s halcyon DFV era still competing in their much-loved original liveries.

1985 MG Metro 6R4
Everybody reveres the extreme Group B era of rallying which dates back to the early 1980s, and the glorious-sounding, V6-propelled MG Metro 6R4 was one of the radical machines created specifically to exploit those audacious technical regulations. The mid-engined brutes were built by the Williams F1 team and, incredibly, a totally mint example with just seven miles on the odometer will be coming under the Silverstone Auctions hammer during a massive road and race car sale over the weekend of the Classic.

1989 Middlebridge Scimitar
HRH The Princess Royal’s lifelong love for Scimitar sportscars will be on show at the Classic as part of a record-breaking display celebrating the 30th birthday of the reborn Middlebridge Scimitar. Princess Anne received her first Scimitar as a 20th birthday present from Her Majesty The Queen and was one of the first to take delivery of an upgraded version after Middlebridge acquired production rights from Reliant. That dark blue 1989 model is still in her ownership today and will be part of a record anniversary display and track parade at the Classic.

2003 Bentley Speed 8
One of the big celebrations at the 2019 Classic will be honouring Bentley’s centenary. The 100-year milestone will be marked with special displays, a track parade and a captivating twilight race on Saturday featuring a number of early cars as piloted by the famous ‘Bentley Boys’ at the 24 Hours of Le Mans back in the 1920s. Even more excitingly, the weekend’s two stellar showdowns in the races for the Aston Martin Trophy for Masters Endurance Legends will, for the first time ever, feature a stunning Bentley Speed 8 prototype as raced to Le Mans victory in 2003.

2019 Brabham BT62
One of the greatest names in motor sport history returns with the launch of the Brabham BT62 – a brutally quick 700bhp, V8-powered track day star that has been created in honour of triple F1 world champion Sir Jack Brabham by an Anglo-Australian company spearheaded by his son David. Just 70 of these £1.2m+ hypercars are being spawned and one will feature among the Astons, Ferraris and Lamborghinis in the Supercar Legends presented by Yokohama display located in the International Paddock at the Classic.

This unofficial Top Ten of unmissable icons is just the tip of the automotive iceberg at the Classic – an event that witnesses more motor sport history in action than any other.

As well as special anniversary celebrations for Abarths, Bentleys, Capris and Minis, this summer’s unrivalled race roster includes super-evocative showdowns for classic era Formula 1, Formula 2 and Formula 3 single-seaters all together on the same race-card for the very first time. There’s also a sparkling Twilight Tribute to Le Mans as the sun goes down on Saturday evening.

Adult tickets start from just £45 and a wide range of child, young adult and family tickets are also available along with camping. Full details of all ticket prices are detailed on the silverstoneclassic.com website.