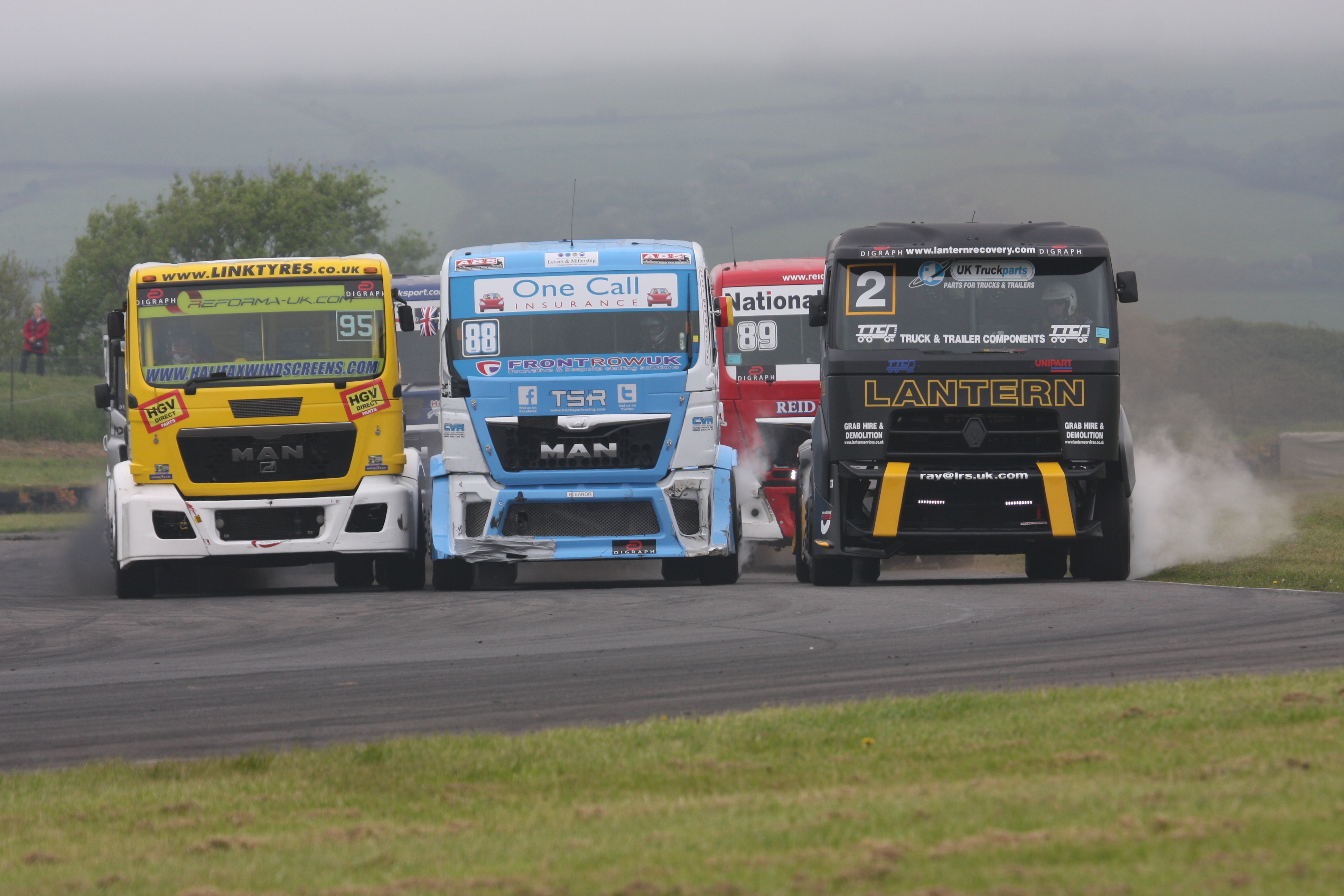 The BTRA British Truck Racing Association Championship rumbles into Thruxton next weekend (13/14 June) for the third round of its 2015 campaign.

The popular British Automobile Racing Club (BARC) series is set to wow the Hampshire crowd at the country’s fastest circuit after an action-packed opening two outings at Brands Hatch and Pembrey.

Normally seen on Britain’s roads and motorways as important transport lifelines, these souped-up tractor units have decoupled and left the trailers behind, as they prepare to go door-to-door around the Andover speed bowl.

The 5.5-tonne, 16-gear thundering tornadoes will tear up the Thruxton tarmac as they attempt to throw down in excess of 1,200bhp through four gigantic tyres. Allied to the fact that each truck is fitted with a six-cylinder turbocharged diesel engine capable of accelerating from 30-to-100mph in an eye-watering six seconds, and they certainly pack a punch!

Fans can expect plenty of bang for their buck from these haulage heavyweights as spectators are treated to five heart-stopping races complete with reversed grids and rolling starts – thrills n’ spills are guaranteed throughout the weekend.

Last time out at Pembrey, David Jenkins scored three successes with his striking MAN truck to move four points clear of Mat Summerfield in the title chase. Ryan Smith and Stuart Oliver were the other two winners in the Division One category as they prop up the leading four positions in the championship heading to Thruxton.

In Division 2 for more road-going machines, Steve Powell is the driver to beat as he chalked up three victories in his Foden in south Wales to top the class standings. The star of the meeting, however, was impressive newcomer Luke Garrett who secured four podium placings including two wins to close the gap to leader Powell in the series contest.

It’s not just the trucks that will keep the crowds on their feet at Thruxton, as there will be a plethora of supporting classes including the Tricolore Trophy, Coupé Cup, S2000 Pinto and S2000 Duratec series, Kumho BMWs, Renault Clio Cup Series and Pickup Truck Racing Championship which will generate plenty of variety and contrast to the monster machines headlining the racing bill.

“We have all the ingredients for another thrilling weekend at Thruxton and it is a highlight for many to see these mighty machines racing flat-out around the country’s fastest circuit,” enthused Thruxton Group Managing Director Bill Coombs.

“The championship has already provided plenty of excitement in 2015 with some great scraps in both classes, and after an excellent weekend at Pembrey the action is certainly beginning to hot up at the sharp end of the field.

“Truck racing is one of the most incredible spectacles in UK motor sport, and it’s always special when they come to Thruxton to see them at full-pelt. In-between the heart-pounding trucking extravaganza, fans will be treated to plenty more electrifying support series racing to keep everyone entertained. Come along, as it has to be seen to be believed!”

Tickets can be purchased in advance by calling 01264 882200 (Option 1) or visiting http://www.thruxtonracing.co.uk/racing/trucks, priced at just £8 for Saturday, 13 June and £16 for Sunday, 14 June, with weekend passes available for £20. Grandstand seats are an additional £3 on Saturday and £5 on Sunday. Accompanied children aged 15 and under are admitted free.