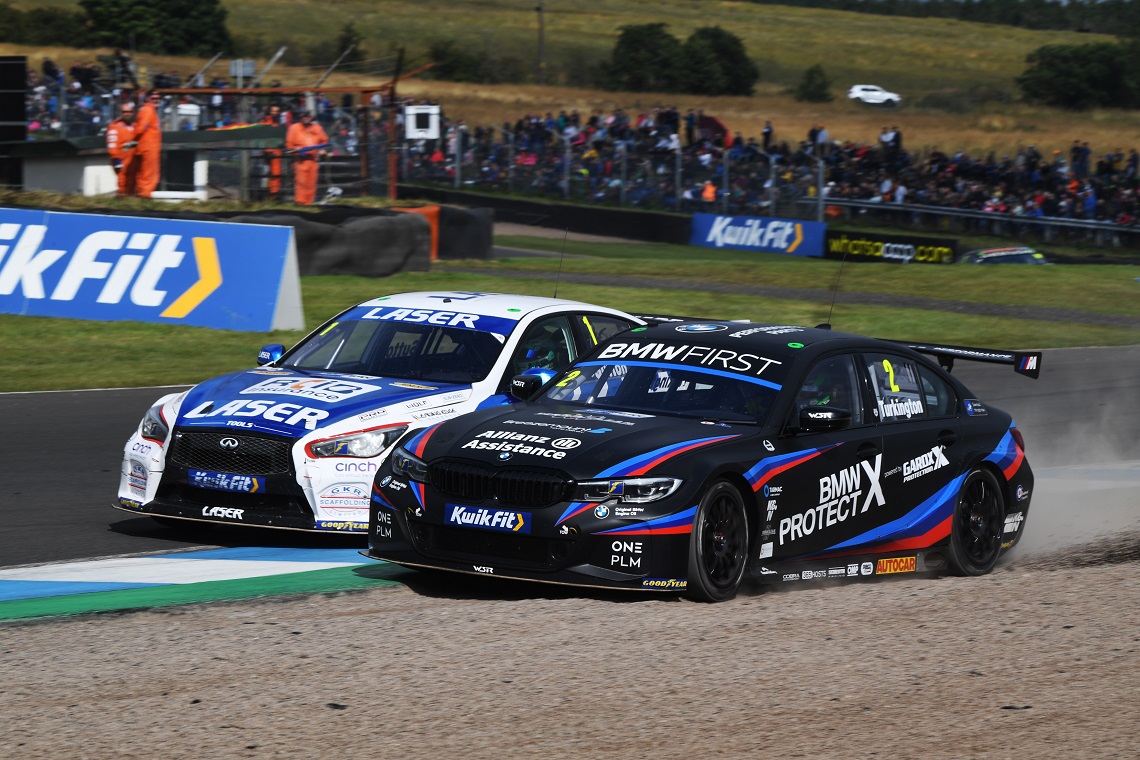 The 2021 Kwik Fit British Touring Car Championship produced a memorable race weekend north of the border, as a trio of title protagonists took the honours today (15 August) at Knockhill.

Reigning champion Ash Sutton struck back to triumph in race two, as he forced long-time leader Turkington into a minor last-lap mistake.

Tom Ingram arguably saved the best until last as he produced the standout move of the season so far to secure his own success in the final encounter around the 1.3-mile circuit.

As the dust settled on the favourite Fife circuit on Sunday evening there was little surprise to see Sutton still leading the standings, with Ingram and Turkington second and third in the order respectively.

The day began with thousands of spectators streaming into the venue following the recent lifting of restrictions in Scotland, as a quite sensational atmosphere built ahead of the curtain-raiser.

Pole-sitter Turkington subsequently cruised to victory as he blasted his BMW 330i M Sport off the line and away from the chasing pack, although an early safety car period initially halted his progress.

The #2 car was rarely under pressure, however, as Turkington stretched his legs once again following the restart to take a much-needed victory in his bid to win a fifth BTCC crown.

Success was even sweeter for Turkington as he also secured the 100th win for the legendary West Surrey Racing squad, with the team having first entered the UK’s premier motorsport series way back in 1996.

Senna Proctor and Josh Cook scored a podium double for BTC Racing as the Honda Civic Type R duo continued to impress around the tight and twisty Scottish circuit.

Laser Tools Racing’s Sutton then secured a famous win in the second bout, after the 27-year-old slipped past title rival Turkington on the final lap.

Turkington – carrying maximum success ballast onboard his BMW due to his earlier victory – held firm for more than 26 laps of the contest, but as Sutton’s #1 Infiniti drew closer and closer the Northern Irishman made a minor error on the final tour.

“You live and learn”, declared Turkington post-race, admitting having taken too much kerb through the chicane under intense pressure, which was enough for Sutton to surge through and take the victory.

MB Motorsport accelerated by Blue Square’s Jake Hill completed the podium positions after showing impressive pace throughout, seeing off BTC Racing’s Cook and Proctor as part of his stellar performance.

Ginsters EXCELR8 with TradePriceCars.com’s Ingram produced a perfect pass on his way to claiming a vital victory in a thrilling Knockhill finale.

From fourth on the grid, Ingram gradually made his way by Proctor’s Honda and Adrian Flux with Power Maxed Racing’s Jason Plato, but the Hyundai man had one final masterstroke up his sleeve as he approached pole-sitter Stephen Jelley.

Team BMW’s Jelley defended valiantly for much of the race, but Ingram eventually sliced his #80 machine down the inside at the final hairpin, charging on to take the win.

Proctor underlined his brilliant weekend with second, whilst Jelley hung on to claim the final podium position.

Overall, Sutton extended his advantage in the standings to 14 points from Ingram, with Turkington a further 20 in arrears.

BMW tops the Manufacturers’/Constructors’ championship, but it’s Sutton and Laser Tools Racing holding the advantage in the Teams’ order and both Independents’ tables.

Daniel Rowbottom’s recent domination in the Jack Sears Trophy finally ended at Knockhill when Carl Boardley scored the best result of his BTCC career so far in race two, but the former maintained his overall lead of the JST standings.

The BTCC returns at Thruxton in Hampshire on 28/29 August.

Colin Turkington said: “I’m delighted to be back on the top step – it’s been a barren few weekends for me! There’s no feeling like winning. Team BMW gave me a great car yesterday for qualifying and that’s the key for any BTCC weekend, starting at the front and trying to convert that. This has always been a good hunting ground for the 3 Series, and it just continues on!”

“I knew it was close [in race two], but you live and learn! I wasn’t struggling, but I could see Ash [Sutton] had better pace. I was under big pressure and you’re trying to thread the needle through there! I was saying to the guys, the past couple of weeks I’d have killed for a P2, or even a P6 really, so it’s great points. I’m disappointed obviously to lose the win but it’s still good to be on the podium.”

Ash Sutton said: “We had a tough task as Colin [Turkington] has been mega all weekend. Pace-wise, we knew we had the upper hand with him having full weight [in race two] so once we got into second, we just buckled down, fired in those quali laps, picked up that fastest lap bonus point and then started piling the pressure on!

“He came off the kerb a little bit, it looked like it unsettled the car and we just made the most of that opportunity. I love racing with someone like Colin. When there’s that mutual respect, you leave each other room, you squeeze each other when it’s right to squeeze each other. That’s my style of racing. So fair play to Colin, he did a mega job, but this one’s for Laser Tools Racing.”

Tom Ingram said: “That was our master plan! We had the conversation before that first race, what we did today was what we tried to do at Oulton Park. It went a bit better this weekend and I’m just so happy, so, so happy! It’s so nice to do it around a circuit like this as well, where the adrenaline’s pumping, everything feels alive, you come in shaking, it’s just a hell of an experience to be able to drive. And so nice to be able to do it in front of fans here at Knockhill – it’s just awesome!