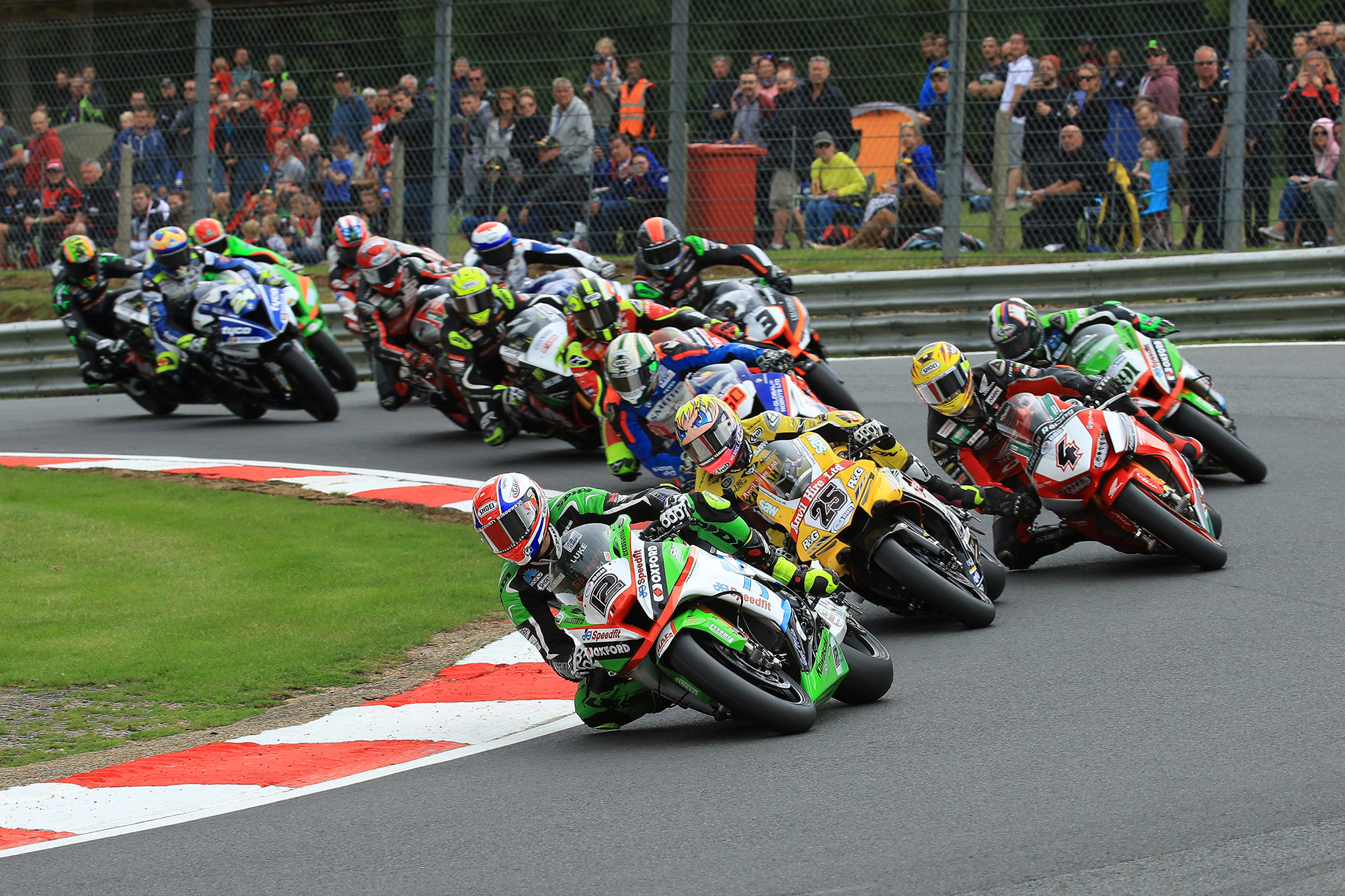 Thruxton is the next stop on the calendar for the all-action MCE Insurance British Superbike Championship next weekend (4-6 August), with the high-speed Hampshire venue primed to stage one of the fastest two-wheeled events anywhere in the world.

Not only that, but the story so far in 2017 suggests the high-octane action will be hotter than the mid-summer sun. Defending champion Shane Byrne currently leads the way, but only after fighting back from a distinctly ‘Shakey’ start to the season, when concussion ruled him out of the opening round.

Back-to-back victories in the two most recent outings have vaulted the Be Wiser Ducati Racing ace to the top of the table as he chases an unprecedented sixth BSB title – but there are a whole host of riders bidding to stop him in his tracks.

Leading the charge are JG Speedfit Kawasaki duo Luke Mossey – one of the revelations of 2017 to-date – and Leon Haslam, who like Byrne has a wealth of international experience under his belt. Both are multiple winners this year, with Mossey regularly taking the fight to a raft of rivals with considerably more experience than him.

Like the Kawasaki young gun, Honda Racing ace Jason O’Halloran reached the rostrum at Thruxton this time 12 months ago and returns next weekend sitting fourth in the standings. Others to look out for include Michael Laverty (McAMS Yamaha) – the top scorer in Hampshire last year – and Byrne’s Ducati team-mate Glenn Irwin, who is battling back from an arm injury sustained earlier in the summer.

As the sprint for the end-of-season ‘Showdown’ intensifies – with only the top six riders earning the opportunity to fight for the coveted crown – the stakes are higher than ever. The final two spots in that pack are currently occupied by Anvil Hire Tag Yamaha’s Josh Brookes – twice a winner here in 2015 and the current lap record-holder – and Smiths Racing BMW star Peter Hickman.

There are also two local riders in the field, in the shape of Tommy Bridewell (Team WD-40 Kawasaki) from Etchilhampton in Wiltshire and former MotoGP legend John ‘Hopper’ Hopkins, who might originally hail from the other side of the Pond in California but currently lives down the road in Portsmouth and competes for Hampshire-based Moto Rapido Ducati.

Whilst the MCE BSB brigade will undeniably be the major draw, there will additionally be a jam-packed schedule of superb support series races from Dickies British Supersport to Pirelli National Superstock 1000 and 600 in association with Black Horse, HEL Performance British Motostar, the Ducati Performance TriOptions Cup and the ever-entertaining Hyundai Heavy Industries British Sidecars in association with Molson.

For the early birds, the Pit Walk at 09:30 on Sunday morning offers the opportunity to meet the riders and grab autographs and selfies with the stars of the show, and the big screens at Allard, the Complex and the Chicane will enable spectators to keep tabs on all the action around the back of the lap.

“The MCE Insurance British Superbike Championship is our biggest race meeting of the year and always draws a huge crowd,” remarked Thruxton Group Managing Director, Bill Coombs. “Watching the finest riders in the country – indeed, some of the finest riders in the world – duel it out just inches apart with millimetre-perfect precision is an awe-inspiring sight, and Thruxton puts them to the test like nowhere else.

“We’ve got an absorbing title fight brewing, which is sure to make the racing even more exciting, and the similarly fast-paced support series ensure there will never be a dull moment. While you’re here, make sure you also check out our trade village behind the start/finish straight and grandstands, our mouthwatering Supercar display and the fantastic value state-of-the-art Skid Pan rides for just £5. There really is something for everyone!”

Advance tickets are available until midday on Wednesday, 2 August priced at just £5 for Friday, 4 August, £12 for Saturday, 5 August and £27 for Sunday, 6 August – or £44 for all three days. Grandstand seats and race day paddock passes are extra. Accompanied children aged 15 and under will be admitted free of charge.

Anybody purchasing or who has already purchased an advance race day or weekend ticket will automatically be entered into a free prize draw to win a unique and exclusive high-speed pillion ride on Sunday, 6 August.

For further information or to buy tickets, see www.thruxtonracing.co.uk/racing/bsb or call 01264 882200 and select Option 1.