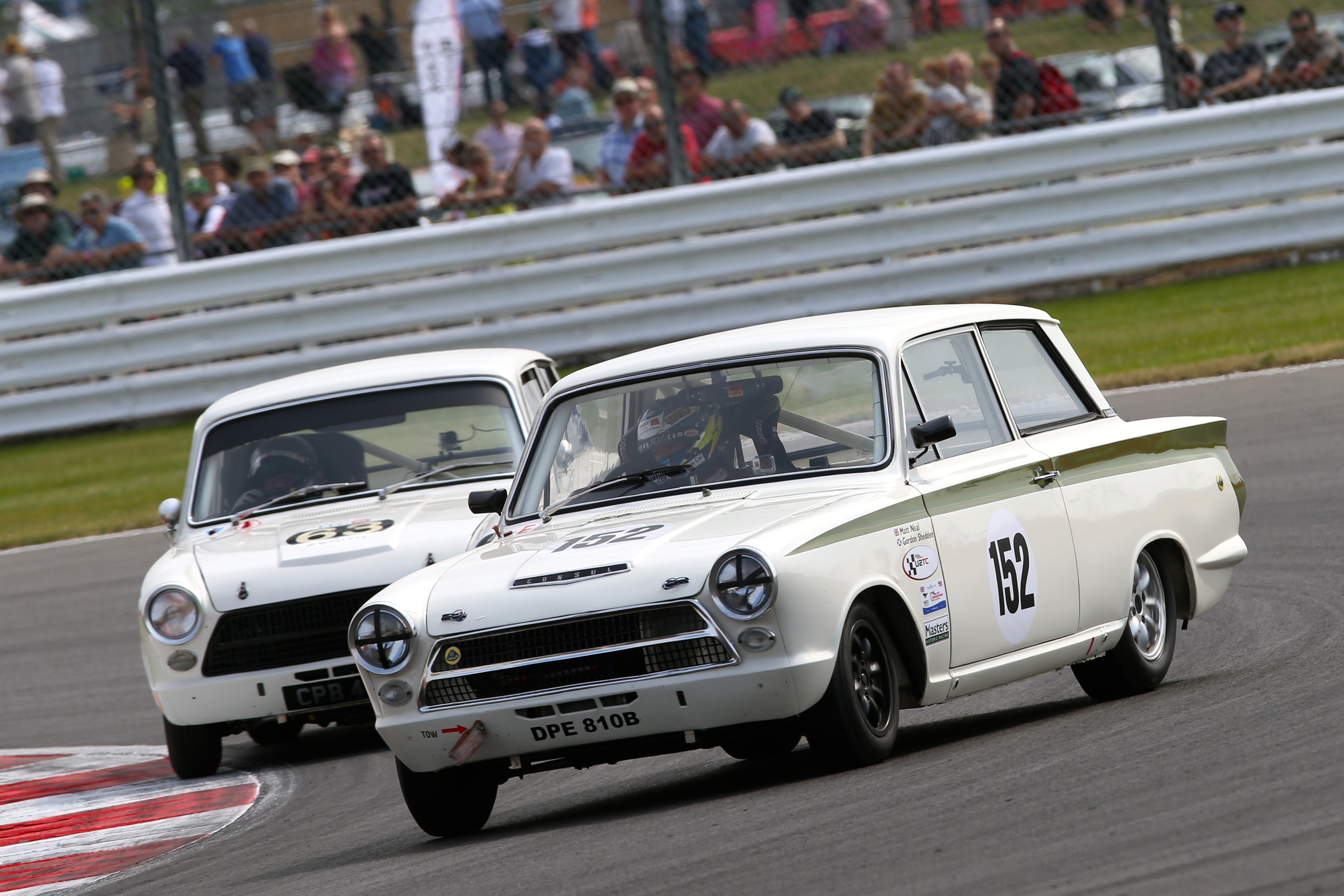 Touring car legends Matt Neal and ‘Flash’ Gordon Shedden are teaming up once again for a second shot at glory at this year’s 25th anniversary Silverstone Classic (24-26 July).

The dynamic duo ­– who between them have racked up no fewer than four coveted BTCC titles – joined forces at last summer’s Classic to share a Lotus Cortina in the popular Saturday morning showdown for pre-1966, Under 2-Litre Touring Cars (U2TC). Shedden took pole position in the Team Dynamics-prepared car and was involved in a titanic battle royale for the lead before a mid-race mechanical issue scuppered all chances of a famous debut victory.

The pair are now revved up for a Classic return and have their sights set on the U2TC win that eluded them in 2014.

“Matt and I will be back in the Lotus Cortina following our escapades of 12 months ago,” confirmed Shedden. “That was the car’s competitive debut, and we haven’t really done anything with it since, so we’ll need to dust off the cobwebs if we want to finish the job we started last year and win the race.”

While competing at the Classic may be something of a weekend away from the pressures of competing for Honda Yuasa Racing in the country’s premier Dunlop MSA British Touring Car Championship, Neal agreed that they would not be taking the challenge lightly. Indeed, U2TC is one of Europe’s most fiercely-fought series for historic racing cars.

“The main aim is to go to Silverstone and have a bit of fun, although of course by nature ‘Flash’ and I are both competitive and we will want to do well,” he divulged. “In fact, we probably need to go out and do a bit of homework with the Cortina, because we’re certainly not underestimating the level of opposition in the U2TC class.”

Notably last summer’s U2TC winners, racing journalist Richard Meaden and Grant Tromans, will be back to defend their title as will runners-up Neil Brown and Richard Dutton – both crews in Lotus Cortinas. Others sure to be battling it out with Neal and Shedden include brothers Andrew and Max Banks in their Alfa Romeo Giulia Sprint GTA and the super-swift BMW 1800TiSA of Richard Shaw and 1969 Le Mans winner Jackie Oliver.

Win, lose or draw, though, the two BTCC boys are clearly excited to be revisiting the Classic next month.

“Last year was my first time at the Classic, and I really enjoyed myself,” enthused Shedden. “I couldn’t believe how many mega bits of kit there were across the board – all in one place. The variety is superb and the grids are massive – there were 41 entries in the U2TC race alone.

“Better still, it’s a real family-friendly weekend, with so much to see and do even aside from the spectacular racing. There really is something for everyone – a great mix of motor sport, live music and entertainment. It’s just a cracking all-round show.”

“I’m really looking forward to soaking up the whole atmosphere,” added Neal. “There are thousands of spectacular cars there from every decade from the 1920s onwards, and for petrol heads in particular it really is manna from heaven. Whatever your passion, the Silverstone Classic’s got the lot.”

Those wanting to see whether Neal and Shedden can make up for last year’s disappointment must purchase their tickets in advance. Adult admission starts from £40 and ticket prices include booking fees, parking, access to all paddocks, infield, grandstands, live music – this year topped by rock legends Status Quo – and the vast majority of the numerous attractions. Full details – together with hospitality packages and weekend festival camping – can be found on the official website: www.SilverstoneClassic.com.