VARIETY IS THE SPICE OF LIFE AT THE SILVER ANNIVERSARY CLASSIC 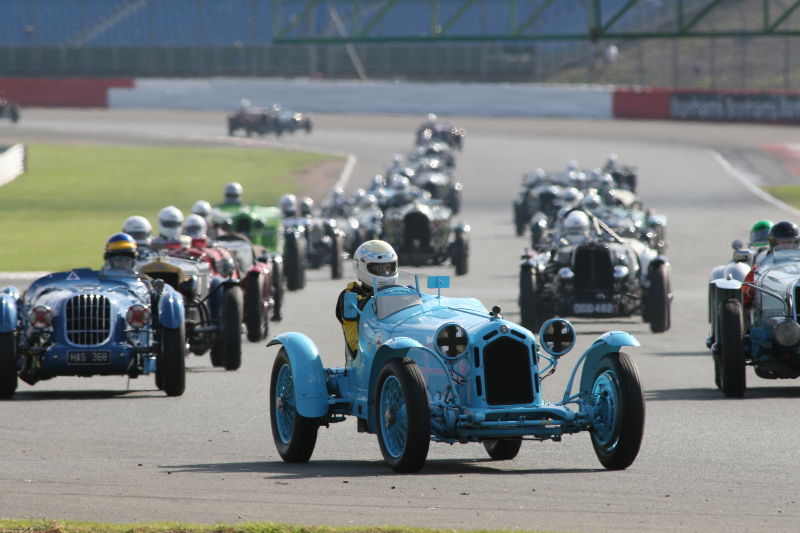 The first sees the welcome return of the charismatic Pre War Sports Cars (top and below left column) while the second is a Classic debut for the popular Guards Trophy GT and Sports Racing Championship (bottom right column). Adding to the spectacle both races will run for 40 minutes with a mandatory pit stop and optional driver change.

The Pre War Sports Car grid was a regular entertainer in the event’s early years but hasn’t featured on the packed bill at the World’s Biggest Historic Motor Racing Festival since 2009. However, with organisers keen to highlight the long-running event’s glorious past – as well as provide visitors with even more motor sport history to savour – the grid rejoins under the evocative ‘Mad Jack’ banner.

Named in honour of Richard ‘Mad Jack’ Shuttleworth, winner of the first Grand Prix staged at a road circuit in the UK back in 1935, the Motor Racing Legends-run Mad Jack Pre War Sports Car race will be one of the major crowd pleasers on Saturday’s action-packed schedule.

It will also be the first time that the latest version of the Silverstone Grand Prix Circuit will host many of the most dramatic and entertaining sports cars from the pre-World War 2 era. These will include mighty 8-litre Bentleys, Type 35 Bugattis and Alfa 8C Monzas along with equally esteemed Aston Martins, Altas, Alvises, BMWs, Frazer Nashes, MGs, Talbots and Sunbeams.

“There are some other really interesting cars out there, too, that we are hoping to attract to Silverstone,” confirmed Duncan Wiltshire, Chairman of Motor Racing Legends. “These pre-War cars were always an integral part of the Classic and it’s fantastic that they will be back in what’s clearly going to be a memorable 25th birthday bash come July.”

Organised by the Historic Sports Car Club (HSCC), the Guards Trophy is the best-supported championship in historic racing. Now the championship for pre-1966 GT and pre-1969 sports-racing cars will get the highest profile race in its history when a capacity grid lines up on Sunday at the Classic.

“I’m delighted that we have been able to secure a slot at the Classic for the Guards Trophy,” said Grahame White, CEO of the HSCC. “This is a just reward for all the drivers who have supported the championship so well over the years.”

White has no doubts that the new race will attract an oversubscribed 58-car grid. “We regularly get 50 and 60-car entries and I’m sure there will be a very big demand for places at the Classic,” he admitted.

The capacity field typically includes Jaguar E-types, Lotus Elans, Ginetta G12s, Morgans and TVR Griffiths. A number of notable Chevron B6s and B8s are also regulars and their presence will be a fitting tribute to the distinguished racing marque founded by Derek Bennett in 1965 that is celebrating its 50th birthday this year.

“The presence of both Pre War Sports Cars and Guards Trophy grids will add yet more variety and colour to this year’s Classic,” enthused Nick Wigley, Event Director. “While sports racers from the Twenties and Thirties may not be among the fastest on show, they will certainly be among the most dazzling and dramatic – everyone loves to watch the drivers as they wrestle to control machines that are big on power and small on grip. We are also delighted to introduce the Guards Trophy to the Classic audience – with a massive 58-car entry, they will provide yet another dimension and yet more entertainment.”

These two additions to the frenetic Classic programme have partially been achieved by the amalgamation of the two Historic Grand Prix Cars Association fields into one massive grid. This will now showcase an incredible spectrum of Grand Prix racing history stretching from early Bugattis and ERAs of the Thirties right through to the game-changing rear-engined Brabhams, Coopers and Lotuses of the Sixties.

Early Bird tickets for the 2015 Silverstone Classic are already on sale offering significant savings of up to 15 per cent. Adult prices start at just £34 and stick to the Classic’s widely praised ‘access all areas’ policy, thus providing admission to both race paddocks, trackside grandstands and the live music concerts.