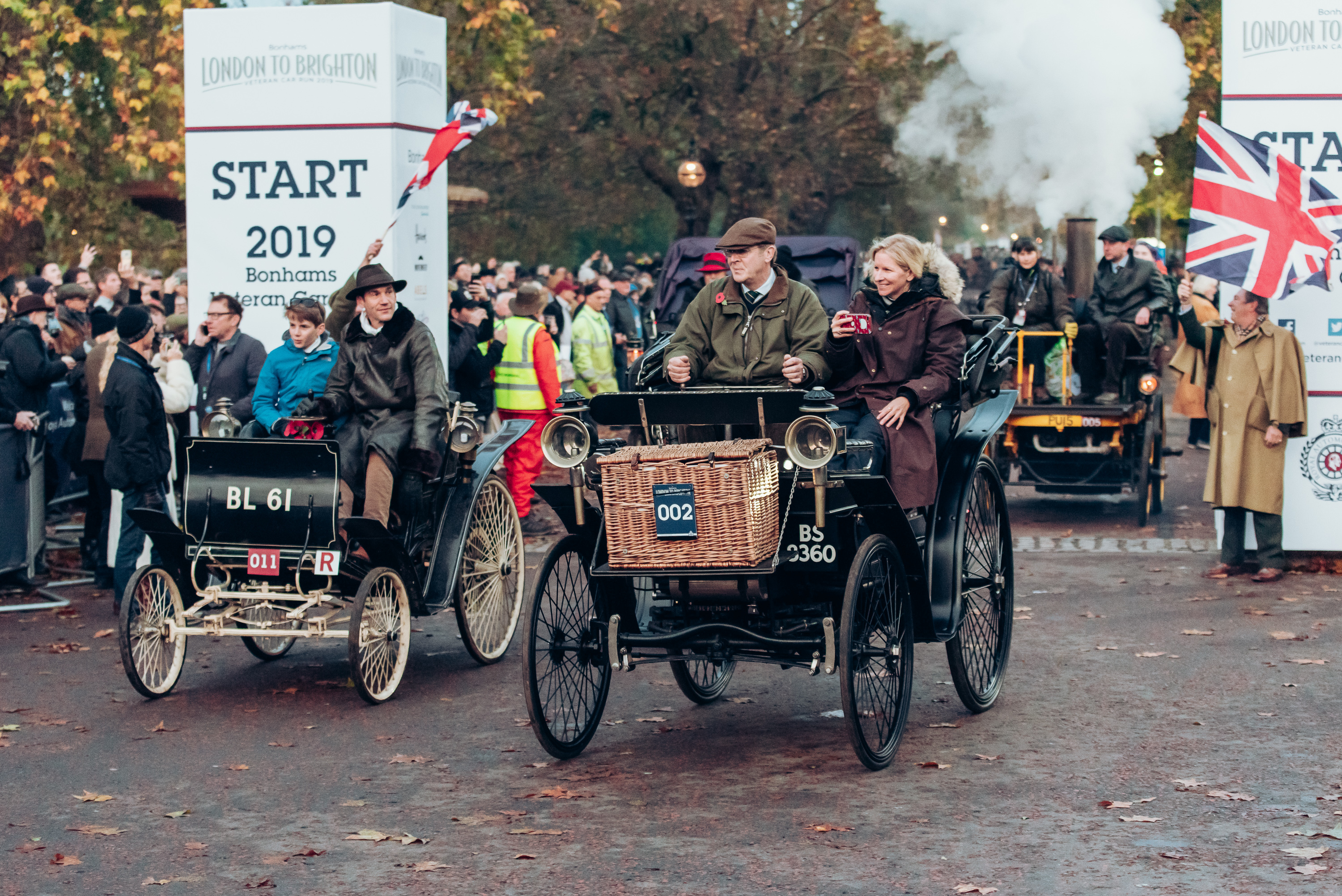 As an unseasonably mild London was still shrouded by darkness, nearly 400 pioneering veteran cars, their drivers and passengers gathered in Hyde Park this morning (Sunday 3rd November) waiting for daybreak to signal the start of the Bonhams London to Brighton Veteran Car Run.

Expressing that new found freedom, the annual Run always commences with the symbolic tearing of the red flag – a pre-dawn ritual this year performed by well-known TV personality and classic car enthusiast Alan Titchmarsh together with Ben Cussons, Chairman of the Royal Automobile Club, custodians of the world’s longest running motoring event.

As daylight arrived – and as a curtain-raiser – seven pre-1905 motorcycles and seven pre-1905 cycles left the start line also headed for Brighton, the pair of penny-farthing pedlars attracted notable admiration as they embarked on their journey to Madeira Drive.

Then, at precisely 06:56am sunrise, the first of the pre-1905 horseless carriages were flagged away with the earliest of the Victorian vehicles leading the way as they phutted and hissed their way through Wellington Arch, down Constitution Hill, past Buckingham Palace, Whitehall and Parliament Square and then over Lambeth Bridge blessed with hazy early morning sunshine. Here the 60-mile route split into two, thus alleviating traffic congestion in South London.

Half of the participants followed the traditional A23 route via Kennington, Brixton and Streatham Common; the other half journeyed via Vauxhall, Clapham Common and Tooting. The two routes then merged on the A236 just north of Croydon with the entire cavalcade reunited as it headed to the spectator-friendly halfway point in Crawley High Street, the South Downs and eventually the Madeira Drive seafront in Brighton.

First away from Hyde Park was a single-cylinder, 1.5bhp velo bodied Benz dating back to the dawn of motoring in 1894. Other early starters included the crowd-pleasing 1896 Salvesen Steam Cart – basically a steam locomotive running on the road complete with stoker shoveling coal into the boiler’s fiery furnace plus an evocative choo choo steam whistle – and a number of primitive motorised tricycles complete with riders and passengers regaled in period costumes.

Thereafter followed a staggering variety of antique machinery dating back to the era of innovative and experimental vehicles – some petrol powered, others propelled by steam and electricity such as the 1901 Pope Waverley owned by world famous Knightsbridge store Harrods; some fitted with steering-wheels, others with naval inspired tillers and helms.

In total, 120 different marques ranging from Adler (built in Frankfurt, Germany) to Yale (from Toledo in Ohio, US) were represented on this year’s Run – some, like Cadillac, Renault, Vauxhall and Mercedes, still well-known today, but the vast majority long since forgotten. Many cars and crews sported moustaches in support of Movember, the event’s official Charity Partner.

Having ably assisted with the tearing of the red flag, Titchmarsh fulfilled a lifetime ambition when sharing the helm of a 1902 Mors to the Sussex seaside resort. Fellow TV presenter and motoring guru, Fuzz Townshend, was behind the wheel of the National Motor Museum’s meticulously prepared 1904 De Dion Bouton.

In total, nearly ninety per cent of the starters made it to Brighton before the 4.30pm deadline to claim a coveted finishers’ medal.

While the Run is famously not a race, the popular A. Lange & Söhne Regularity Time Trial provided a competitive element. More than 230 entrants elected to take part in the Trial by attempting to keep to a strict average speed for the stretch between Crawley and Burgess Hill. The winner was Paul Emile Bessade a 1904 Darracq who covered the 13 miles at an average speed of 10.1mph compared to his 10mph target.

As in recent years, the Bonhams Veteran Car Run provided a fitting finale to the Royal Automobile Club’s busy London Motor Week – during which the Club presented an array of functions and events.

The penultimate event in the week was the free-to-view Illinois Route 66 Regent Street Motor Show, on Saturday 2 November, which turned London’s flagship shopping street into a motoring showcase that put the spotlight on veterans and moderns alike and attracted hundreds of thousands of visitors.