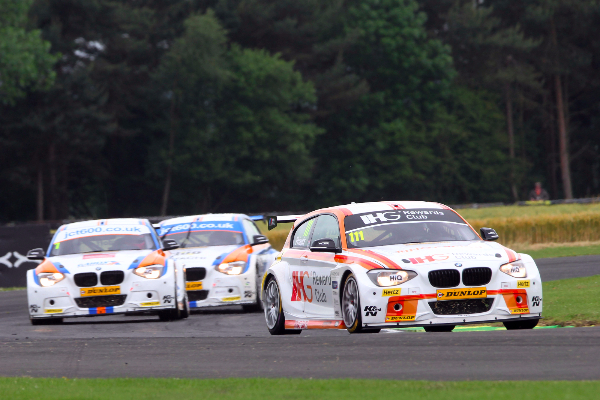 The weekend also included two debutants – Max Coates for Support Our Paras Racing and Nicolas Hamilton for AmDTuning.com who became the first disabled driver ever to compete in the BTCC.

WSR scored a sensational 1-2-3 finish in the opening race – becoming the first squad to do so in six years – as Priaulx led home team-mates Tordoff and Collard.

With only Gordon Shedden’s Honda preventing the BMW trio from starting Sunday’s opener in the top three positions, it didn’t take long for Collard to steal an advantage over the Civic Type R to follow his stablemates line astern through Clervaux for the first time.

Pole-sitter Tordoff led Priaulx and Collard with the Yorkshireman looking comfortable out front for much of the early running. The JCT600 with GardX-backed driver had pulled a gap of more than eight tenths of a second by the end of lap five as light rain began to fall. The defining moment came shortly after when Tordoff made a slight mistake at the chicane on the now greasy surface and Priaulx nipped through to head the field.

The rain eased almost as quickly as it had started and the three drivers settled into position for the remainder of the race. Collard dropped away into the clutches of Shedden’s Honda late on, but he held station to help the team to its first ever podium clean sweep.

Tordoff bounced back to claim a lights-to-flag victory in the second encounter as he dominated proceedings for the 15-lap duration. There would be no repeat of his race one error as he blasted the #7 BMW 125i M Sport off the line before pulling out a comfortable gap to the chasing pack.

Second placed Priaulx’s attention was taken away by the Team BMR duo of Jason Plato and Colin Turkington, who similarly had to fend off an attack from the fast-starting Collard. Plato and Turkington tag-teamed Priaux’s Team IHG Rewards car as the VWs nipped by before the former triple World Champion could generate enough heat into his Dunlop SportMaxx tyres.

Priaulx was soon up to speed as he set about hounding Plato and Turkington, but the VW pairing prevailed to complete the podium positions.

Collard joined the WSR race-winning party by taking a memorable victory in the final contest, despite initially losing the lead to Honda Yuasa Racing’s Shedden.

The pair had already clashed in the second bout when Shedden got the better of Collard in a fight for fifth, but the WSR driver would not be denied on this occasion.

There was slight contact on lap 12 as the two cars made their way round the long right hander approaching the chicane, which was enough to unsettle the leading Japanese machine. Collard looked to have completed the move and that was confirmed when Shedden bounced across the grass as he straight-lined the chicane during the squabble.

Shedden fell back towards Priaulx’s WSR BMW late on and suddenly it was the tussle for second taking centre stage. They were nose to tail on the last lap with Priaulx eventually claiming the duel as he sneaked past at the final hairpin to take second.

Team BMR’s Turkington and Plato held station for much of the final race to secure fourth and fifth respectively ahead of Tordoff’s BMW. The race two winner clinched the position late on after he made an almost carbon copy move to that of race winner Collard on Shedden, but this time it was Tordoff passing the other works Honda of Matt Neal.

Despite being shuffled down the podium order it has still been an extremely successful day for Shedden as he leads the drivers’ standings at the midway stage of the season.

The 2012 champion holds a ten point advantage over Plato, whose old rival Neal is a further 12 points back. Tordoff has benefited most from a quite brilliant weekend by firing himself into championship contention. He’s now fourth, a point ahead of Turkington and six clear of MG Triple Eight Racing’s Andrew Jordan.

Honda Yuasa Racing leads the Manufacturers/Constructors championship, while Team BMR continues to top the Teams’ order. Turkington takes over from Plato for Independent Drivers’ honours whilst two victories for Josh Cook in the Jack Sears Trophy extends his advantage.

The BTCC now takes a six-week summer sabbatical before the contest continues at Snetterton in Norfolk on 8/9 August.

Andy Priaulx said: “It’s been amazing – the first win since coming back was just great, then to get second place at the last moment in race three topped it all off. I got through the whole day without any scratches too, which is a pretty big achievement! So far this year we haven’t converted our pace into results, but it’s so good to be back to winning ways. I’m still learning every weekend but we’ve broken the duck now so we’ll keep pushing on.”

Sam Tordoff said: “It’s been a fantastic day. A win, a second and a hard-fought sixth on soft tyres is a great set of results and our position in the championship reflects this. It’s been a great home weekend and the crowds have been brilliant. There was pressure on us coming in, but we more than delivered as a team with three wins. I envisaged I’d be in the championship challenge, and this weekend has put us right up there. We’ll be working hard over the summer break – I’ve got fond memories of Snetterton from the last few years so I’m confident going there.”

Rob Collard said: “This is such a great team and an amazing group of people, so to score three wins in a day is just incredible. They work so hard to produce such a good car and we can’t always show that, but today is for all the work everyone at WSR has put in. Gordon [Shedden] put me under a lot of pressure at the start so I let him go and gambled that his tyres would go off. Thankfully it worked and everything went to plan. It’s just been a brilliant day for all three of us.”

Gordon Shedden said: “I didn’t expect to see the podium this weekend – let alone on the soft tyre. There were some intense moments in the last race but it’s a good result. It’s been tough for us this weekend, but I’m sure the tide will turn in our direction at some circuits we’ve got coming up. That’s another piece of silverware for the Civic Type R – we’ve been on the rostrum at every track so far this year, which is brilliant for a brand new car. It’s so competitive this season that you’re never going to be able to win every race, but we’re in a great place going into the summer break at the top of the standings.”

Jason Plato said: “I’m pretty pleased with the weekend and where we are – we’ve only given away a handful of points at a circuit which on reflection isn’t going to be one of our strong ones this year. The gamble in race one paid off – had I gone out in 12th with maximum ballast and the soft tyre it could have ruined the weekend. For the second half of the year we’ve got a lot of circuits where we’re going to be very strong and only Knockhill where I think we might struggle a bit.”

Matt Neal said: “We just didn’t have the luck we needed this weekend. Fifth was a pretty decent finish in the first race and the car felt better in race two. It’s not easy to overtake around here and in race three I got up as far as seventh before the tyre performance fell away. Onwards and upwards, though; it’s still very close in the championship, and whilst I normally look forward to the summer break, I’m enjoying driving the Civic Type R so much that I just want the season to keep going right now!”

Colin Turkington said: “It’s another great weekend for Team BMR – there hasn’t been an event this year where we haven’t been quick. Given my track record at Croft there’s no way I was going to leave without getting on the podium! It’s so close at the top, but I was pleased with my pace all day and I think we’ve really turned a corner on my car – the balance has been really good. We should be quick at almost every circuit from now on, and I really feel like the car is coming to me now.”

Nicolas Hamilton said: “It has been pretty phenomenal and a bit surreal. I am so proud to be here – these guys are so quick. It was as tough as I expected it to be. I did what I needed to do and when you consider it was my first race start, the first time I’ve run down to turn one in the pack and so on, I think I did a good job. I’ve learnt so much and I’ve had tons of support from everyone. To see I’m inspiring people means everything to me and I can’t thank the fans enough.”
2015 Dunlop MSA British Touring Car Championship – Croft

Team JCT600 with GardX has received a 20 point deduction from the Teams’ championship for having changed two engines above the number permitted.

Team IHG Rewards Club has received a ten point deduction from the Teams’ championship for having changed an engine above the number permitted.

West Surrey Racing has received a 30 point deduction from the Manufacturer/Constructors’ championship for having changed three engines above the number permitted.