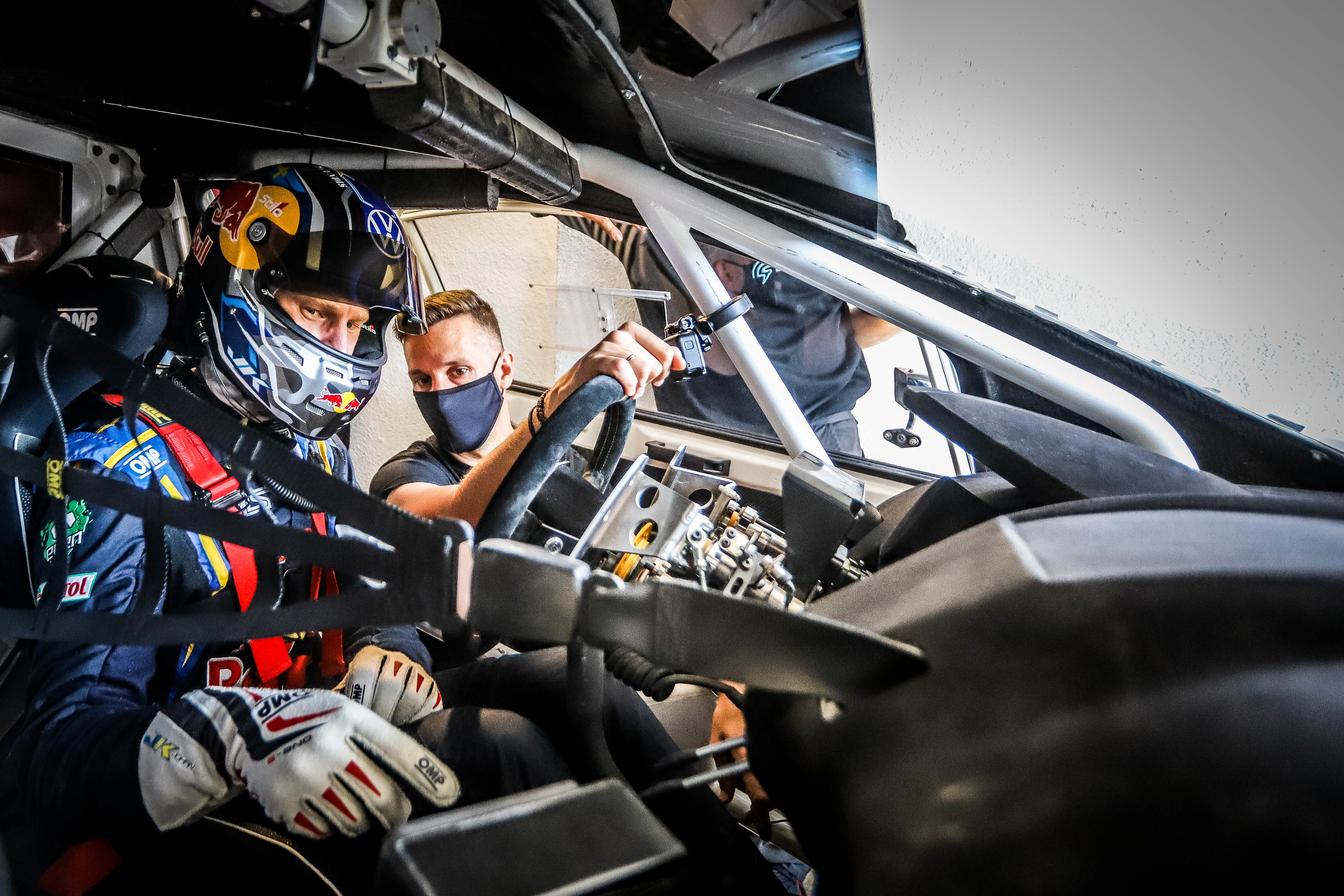 Two-time World Champion Johan Kristoffersson was amongst those keen to take a closer look at the new FIA RX2e Championship car in Barcelona last weekend, as the FIA World Rallycross Championship community took the opportunity to find out more about the first-ever FIA electric rallycross championship.

Key personnel from QEV Technologies – the electro-mobility specialists behind the project – were on-hand to talk through the core features of the car, which offers a significant step forward in both power (+24%) and torque (+14%) compared to the existing Supercar Lites machine.

Team Hansen race-winner Kevin Hansen and XITE Energy driver Oliver Bennett dropped into the garage for a detailed guided tour of the RX2e car, as did GRX Taneco Team Manager Jussi Pinomäki. They each left impressed by the quality and on-board technology, which will be incorporated into all 20 cars ahead of the championship’s inaugural season in 2021.

Over the race weekend, RX2e test-driver and ambassador Oliver Eriksson drove a handful of demo laps, broadcast to more than 120,000 viewers during the official FIA World RX livestream. He then returned to the track in earnest on Monday at the nearby Circuit Calafat, where he was joined by countryman – and fellow Red Bull athlete – Kristoffersson and home hero Albert Llovera.

The Swede – currently leading the World Championship standings – climbed into the cockpit himself and enjoyed several minutes behind the wheel, offering invaluable feedback that will be analysed and utilised in the RX2e car’s ongoing development.

The final car is set to be officially presented towards the end of this year, and six European events are planned for the first season of the FIA RX2e Championship, with the full calendar to be released in due course.

Joan Orús, COO, QEV Technologies, said:
“It was a big moment for us to officially ‘launch’ the RX2e car on the World Championship stage, even if it was not the final version. Our headquarters are based not far from the Circuit de Barcelona-Catalunya, and it was very rewarding to see such high interest from drivers and teams, fully validating all of the hard work put in during recent months by our first-class crew just down the road.

“I must admit, I was particularly proud to see Oliver take to the track on Saturday and Sunday. Although we are not yet operating at full power, he was still able to offer a glimpse of what the RX2e car will be capable of and how much of a step forward in performance it represents over the existing internal combustion-engined car.

“To then have Johan Kristoffersson try it out on Monday as well was simply the icing on the cake. Johan is the best and most complete driver of the current era, so there is nobody better than him at understanding just what makes a rallycross car tick. His comments confirmed that we are moving in the right direction, and give us even more motivation going forward. The future looks very exciting indeed!”

Oliver Eriksson, Test-Driver and Ambassador, FIA RX2e Championship, said:
“It’s been a busy, but very productive and enjoyable week. It started out with a few days’ testing, which resulted in some good progress, and then we got to show this beauty off to the watching world in Barcelona. I have to say, I was a little taken aback by just how much interest there was. I don’t think I ever stopped talking to people and showing them round the car on Friday afternoon!

“Of course, the highlight for me was getting to drive the demo laps, and I hope everybody watching at home enjoyed seeing the car run in ‘public’ for the first time. It was a major moment for us as we prepare to join the World Championship package for real next year. Now, though, we’re back on the test track and back in the workshop to ensure we provide the future RX2e drivers with the very best product possible – and we won’t stop working until that job is done!”

Kevin Hansen, Driver, Team Hansen, FIA World Rallycross Championship, said:
“The RX2e car has been beautifully built, and it’s exactly what the next generation of drivers need to prepare themselves for stepping up to the RX1e class. I’m a big believer in the electric future of our sport, and the technology that has been incorporated by QEV is truly cutting-edge. I’m super excited to have our #YellowSquad drivers in a category like this.”

Johan Kristoffersson, Driver, Kristoffersson Motorsport, FIA World Rallycross Championship, said:
“It was my first experience of driving an electric race car. The first time is always fun, and it was definitely exciting. The initial feeling I got was quite impressive, and it would be great to do some more testing and try out some more new things. From everything I’ve seen so far, RX2e promises to be a real step in the right direction and a great springboard to World Championship level.”