By Russell Atkins24th May 2015NEWS 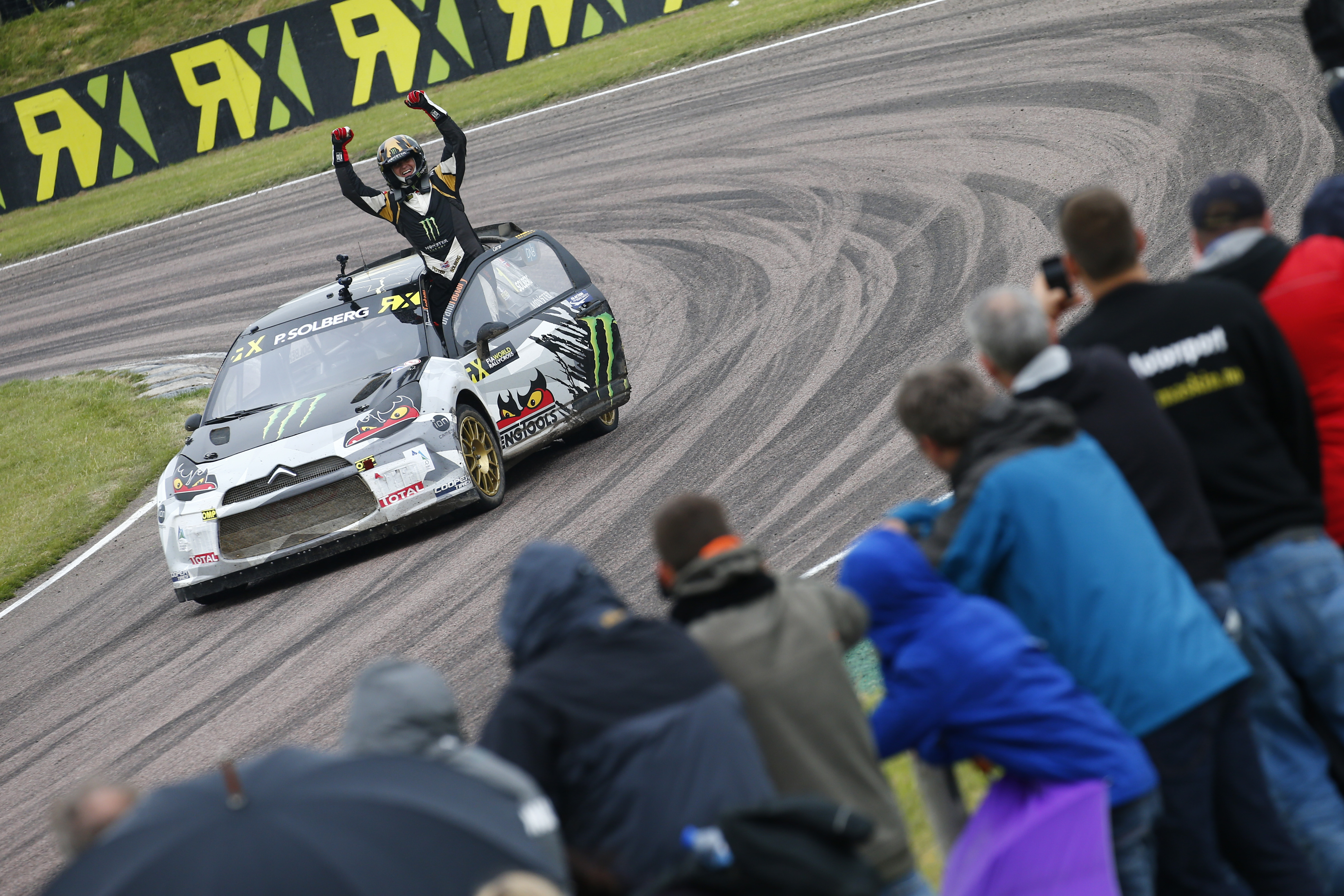 Inaugural FIA World Rallycross Champion Petter Solberg thrilled a record crowd at Lydden Hill today (Sunday, 24 May) with a nail-biting triumph to cap off a pulsating day of high-octane entertainment at the sport’s spiritual home.

Under blue skies and Bank Holiday sunshine, the on-track action was fast-and-frenetic from lights to chequered flag, from the headlining, flame-spitting Supercars – pumping out an eye-watering 600bhp and capable of out-accelerating a Formula 1 car from 0-60mph – all the way down through a packed programme of support races for what was a full house of fans to enjoy.

Having topped the pecking order overnight following Saturday’s opening two heats, Solberg maintained his supremacy despite encountering dramas in both of his heats today, with home heroes Andrew Jordan and Guy Wilks – wild card entries both – joining the flamboyant Norwegian in the semi-final dozen.

Birthday boy Jordan claimed a popular and hard-earned victory in his third heat, whilst rally star Wilks’ spectacular, tail-out sideways style behind the wheel of JRM Racing’s new MINI RX was a sure-fire crowd-pleaser and belied the Yorkshireman’s lack of prior testing.

Fellow Brit Liam Doran was disappointed to miss out on the semi-finals after a troubled Saturday, whilst as a mark of the calibre of the competition and no-holds-barred nature of the racing in the 29-strong field, several other big names also failed to make the cut. These included Toomas ‘Topi’ Heikkinen – winner of the previous World RX round in Belgium – multiple X Games gold medallist and Top Gear USA presenter Tanner Foust and former European Rallycross Champion Timur Timerzyanov.

As the tension mounted, the crowds were kept entertained as rallycross legend Will Gollop was reunited with his favourite Silkolene MG Metro 6R4 and a Spitfire performed a roaring flypast, before the Supercar semi-finalists returned to the track.

The first was won by Solberg ahead of Johan Kristoffersson – whose first child had been born barely a handful of hours earlier – and Reinis Nitiss, whilst Mattias Ekström dominated the second in his Audi, leading home 2014 Lydden winner Andreas Bakkerud and Wilks, who upheld home honour with a feisty showing. Jordan finished fifth, narrowly missing out on a final spot by just over a second.

Following a sun-kissed day, light rain began to fall ahead of the final, injecting proceedings with even more excitement and anticipation. The six-lap race boiled down to a gripping, nip-and-tuck duel between Solberg and Ekström on an increasingly slippery track.

From the outside of the front row of the grid, the Swede took his ‘joker’ immediately, whilst his pole-sitting rival left it until the last lap, with the result that the pair emerged side-by-side. Notwithstanding a slow puncture at the end, Solberg held on to flash across the finish line first by barely a third-of-a-second.

“What a fantastic weekend here at Lydden Hill, with an amazing atmosphere and a great crowd!” enthused the 2003 World Rally Champion, who has extended his advantage in the title standings by a further seven points. “It was a big fight against Mattias in the final, and I was getting the split times from my team so I knew it was going to be tough and I had to push like mad over the last couple of laps – right to the limit. Close battles like that are what rallycross is all about, and I loved every second of it!

“A lot of the mechanics in my team are British and have their families here, so I’m really happy for all of them. Winning at Lydden after being so successful on Rally GB is a dream – this is a fantastic track and Britain is practically my second home. Ok, I won here already on Top Gear, but then I only had to beat ‘Captain Slow’ – this one means so much more…”

Kristoffersson completed the podium trio in third, ahead of Olsbergs MSE duo Andreas Bakkerud and Reinis Nitiss. Wilks was unfortunately forced to retire after picking up a puncture shortly after the start – but the two-time British Rally Champion was nonetheless delighted with his rallycross debut on his first competitive run in JRM’s new MINI RX.

“I tremendously enjoyed the weekend,” he remarked. “We didn’t really come here with any expectations; we just wanted to get as much running in as possible to develop the car. If you’d told me beforehand that we would make it all the way through to the final, I’d have said ‘get in!’ I would have been ecstatic simply to get into the semis.

“The team has done a brilliant job and I don’t think anybody is going to go away disappointed. It’s been a great weekend, the fans have been amazing and I definitely want to do more of this!”